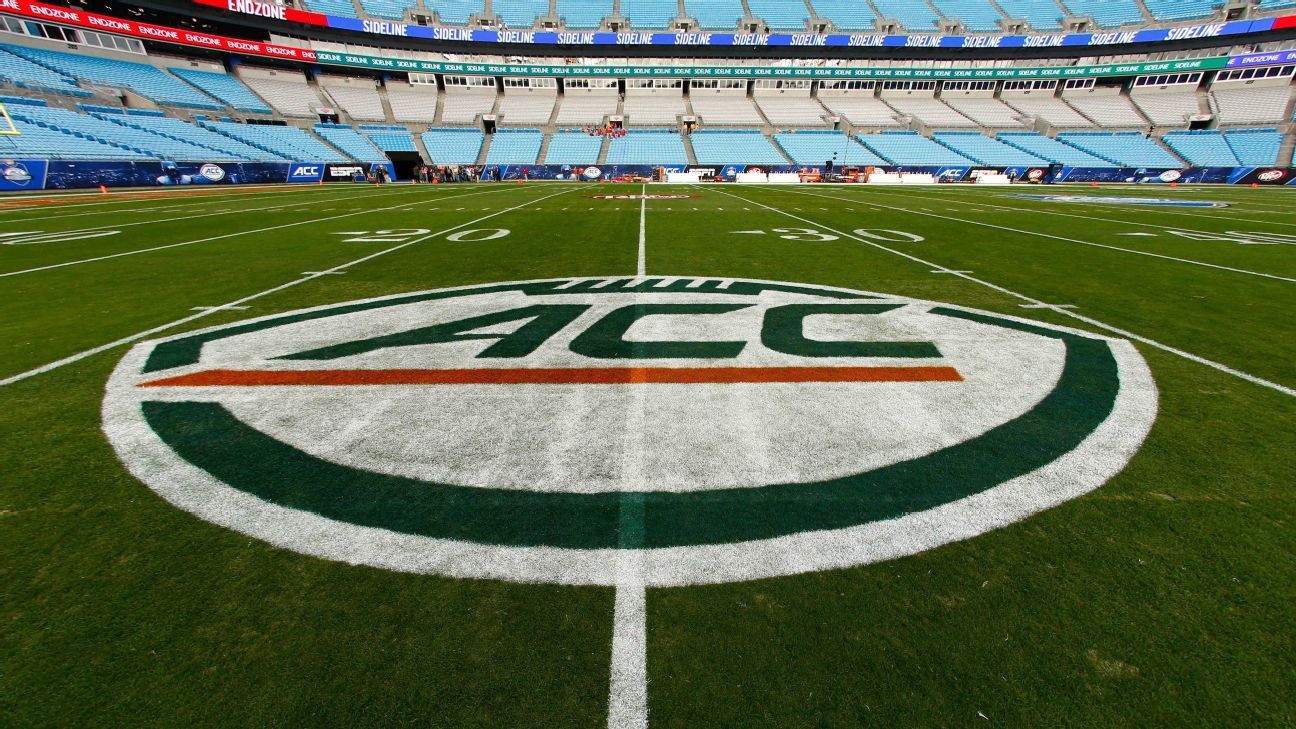 The ACC board of directors voted Wednesday to proceed with an 11-game football season that begins the weekend of Sept. 12 — and includes FBS independent Notre Dame playing a full league schedule — but only if public health guidance allows.

All ACC schools and Notre Dame will play 10 conference games plus one nonconference game of their choosing, and the Fighting Irish will be eligible for the ACC championship game. There will be no divisions for this season only.

The nonconference game must take place in the home state of the ACC institution, and all nonconference opponents must have met the medical protocol requirements as agreed upon by the ACC during the coronavirus pandemic.

The 11 games will be played over at least 13 weeks, with two built-in bye weeks. The ACC championship game will be played in Charlotte, North Carolina, on either Dec. 12 or Dec. 19 and will feature the top two teams with the highest conference winning percentages.

The ACC scheduling rules would eliminate all three Chick-fil-A Kickoff Game matchups scheduled to be played in Atlanta: Florida State–West Virginia on Sept. 5, Virginia–Georgia on Sept. 7 and North Carolina–Auburn on Sept. 12.

The ACC shared each team’s conference schedule on social media shortly after the announcement.

The 2020 Football Schedule Model has been announced.

The ACC will release the full schedule at a later date. Though it is difficult to completely eliminate long-distance travel in a league that spans Florida to New York to now Indiana, most of the new league schedule features more regional games to limit those trips.

“Today’s decision was made after months of thoughtful planning by numerous individuals throughout the conference,” ACC commissioner John Swofford said in a statement. “The Board’s decision presents a path, if public health guidance allows, to move forward with competition. Our institutions are committed to taking the necessary measures to facilitate the return in a safe and responsible manner. We recognize that we may need to be nimble and make adjustments in the future. We will be as prepared as possible should that need arise.”

The board of directors, consisting of the ACC’s presidents and chancellors, met Wednesday to decide what to do about the fall sports season with the coronavirus pandemic showing no signs of slowing down. With fall football practice set to begin next week and a previously announced timetable to make a decision by the end of July, the group was presented multiple scheduling options.

All 15 teams will be a part of the bowl process, and Notre Dame would be eligible for the ACC’s slot in the Orange Bowl if it is not selected as a College Football Playoff semifinalist. All television revenue for the 2020 season, including Notre Dame’s home games broadcast by NBC, will be shared equally by all 15 institutions.

Notre Dame already had six ACC league games for 2020 as part of its scheduling agreement with the conference, including Clemson. The Irish add Florida State, Boston College, Pittsburgh and North Carolina. Currently, Notre Dame has nonconference games scheduled against Arkansas, Navy and Western Michigan. Only the Navy game is on the road, and is scheduled for Sept. 5 after having been moved from Ireland.

The new scheduling arrangement follows months of discussions about the best way to handle the fall sports season. The league’s medical advisory group has put forth minimum standards for each campus to follow — including weekly testing for contact sports, standards for reporting positive tests and protocols for cleaning and sanitizing competition areas.

“As we look ahead to the fall, the safety of our students, staff and overall campus community continues to be our top priority,” said Kent Syverud, chancellor of Syracuse University and the chair of the ACC board of directors. “Today’s announcement outlines a specific path for ACC fall sports to return to intercollegiate athletic competition using comprehensive protocols put forward by our ACC Medical Advisory Group. As a league, we understand the need to stay flexible and be prepared to adjust as medical information evolves in conjunction with local and state health guidelines.”

In addition to football, the six other ACC fall Olympic sports may begin Sept. 10. Team sports will play a conference schedule that meets the NCAA minimum amount of games: field hockey (6), women’s soccer (6), men’s soccer (6) and volleyball (10). Any additional games can be played at the school’s discretion. Any additional conference games played beyond the minimum would not count in the league standings.

The league membership, and its medical advisory group, will continue to meet on a weekly basis to share information and discuss medical issues related to the ACC’s return to play. The ACC Board of Directors will make any adjustments that need to be made in the future.