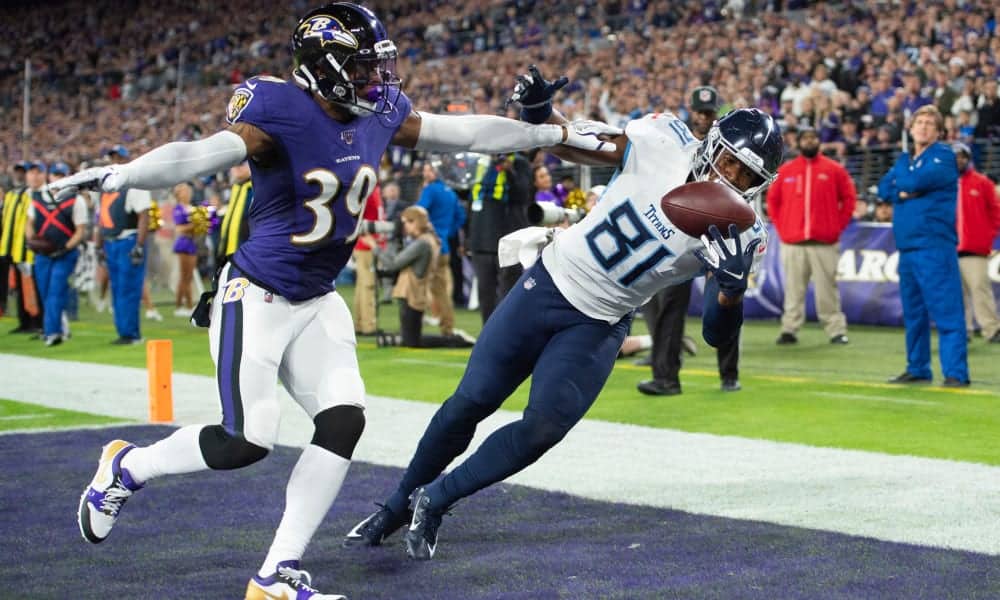 The Tennessee Titans came up just short in their 2019 playoff push. After taking down the New England Patriots in the first round and dispatching the AFC number one seed Baltimore Ravens in the Divisional Round, the Titans were eventually bested by the Kansas City Chiefs in the AFC Championship. So many areas of this team helped in this run, but one does go under the radar when the discussion comes up, TE Jonnu Smith’s OSM scores led everyone in the league.

According to Pro Football Network’s Offensive Share Metric, the Tennessee Titans TE was not only the top-ranked TE of 2019, but he was also the best overall player in the NFL with an overall OSM score of 44.32. This was three points higher than the runner up, Minnesota Vikings TE Kyle Rudolph, and the highest recorded overall OSM score of any player since the beginning of the NFL’s Next Gen Stats in 2016.

At first glance, Jonnu Smith is not someone’s name you would necessarily equate with best pass-catcher in the league, but OSM is much deeper than just yards and touchdowns. According to the NFL’s Next Gen Stats, Smith had the third-highest average separation among pass-catchers in 2019, finding 3.7 yards of space between himself and the defender at the time of completion or incompletion.

Not only was Smith finding space, but he also proved he has a solid set of hands as well and dropped jaws with his catch radius last season. He caught 35 of his 44 targets in 2019, earning a catch percentage of 79.55%, the third-highest among all pass-catchers, and second among TEs in 2019. Smith has steadily improved this area of his game catching just under 20% more of his targets in 2019 compared to his catch percentage of 60%  during his rookie campaign in 2017.

Jonnu Smith getting a big-time shoutout on NFL Network during the tight end drills at the combine #Titans pic.twitter.com/HJpPFKvEIv

The Titans switch at quarterback from Marcus Mariota to Ryan Tannehill also plays a role here. Since being drafted in the third round of the 2017 NFL Draft out of Florida International University, Mariota has only targeted Smith 30 times per season during his first two years. Tannehill targeted Smith 37 times while playing in 12 games and starting in just ten during the 2019 season.

A player like Smith is one that gels well with Tannehill. He excels at finding open space giving a clean and open target for his QB to find. While his catch percentage has been a work in progress, Smith provided Tannehill with a consistent pair of hands and gave him the trust that he would complete his targets in 2019.

It was not too long ago that the Tennessee Titans saw substantial contributions from the TE position. From 2014-2017 Titans TE Delanie Walker found 800+ receiving yards and was a dependable weapon on the field. He earned overall OSM scores of 33.29 in 2016 and 32.91 in 2017, ranking in as TE 21 in both seasons. However, father time catches up to everyone, and over the past two seasons, Walker has played in just eight games due to injuries.

Walker dislocated and fractured his right ankle during the Titans season opener against the Miami Dolphins in 2018, causing him to miss the entirety of the season. He was able to come back in 2019 for seven games but was ultimately forced back on injured reserve after suffering a grade 2 sprain to the same ankle in Week 7 versus the Los Angeles Chargers.

His absence has led to more snaps and targets being thrown Smith’s way, and while they did stay somewhat small his first two seasons, this breakout in 2019 could mean big things for him in the years to come. In response to Smith’s emergence and Walker’s inability to stay on the field, the Titans released the veteran TE on March 13, 2020, saving $6.4 million against the cap.

Smith’s secret weapon on the field

After conducting some research and watching some plays from last season, Jonnu Smith has a secret weapon in his arsenal: Speed. Smith is pretty fast for a TE, and the Titans used this to their advantage last season, giving him a few touches out of the backfield, one of which he took off running for 57 yards.

Smith earned a Relative Athletic Score of 8.28 in the year he was drafted, which featured an elite explosion grade and a great speed grade based on his results from the 2017 NFL Draft Combine. His 40-yard dash clocked in at 4.62 seconds, which is very respectable at the position. However, his speed has been witnessed on the field. Smith has left defenders in the dust on completions, screens, that rush mentioned above, and even in pursuit of a turnover.

Jonnu Smith came from the first few yards of the end zone to keep this from being a pick-six. pic.twitter.com/KhENuPgyGk

Combining that speed with the separation, catch radius, and reliable hands mentioned earlier, Smith can become a lethal threat from the TE position for Tannehill and the Titans for the 2020 season and possibly beyond if both parties can agree on an extension. Smith has set himself up nicely in 2020, with Tannehill returning as the starting QB next season it will be intriguing to see how much more he targets the TE in six more starts barring injury.