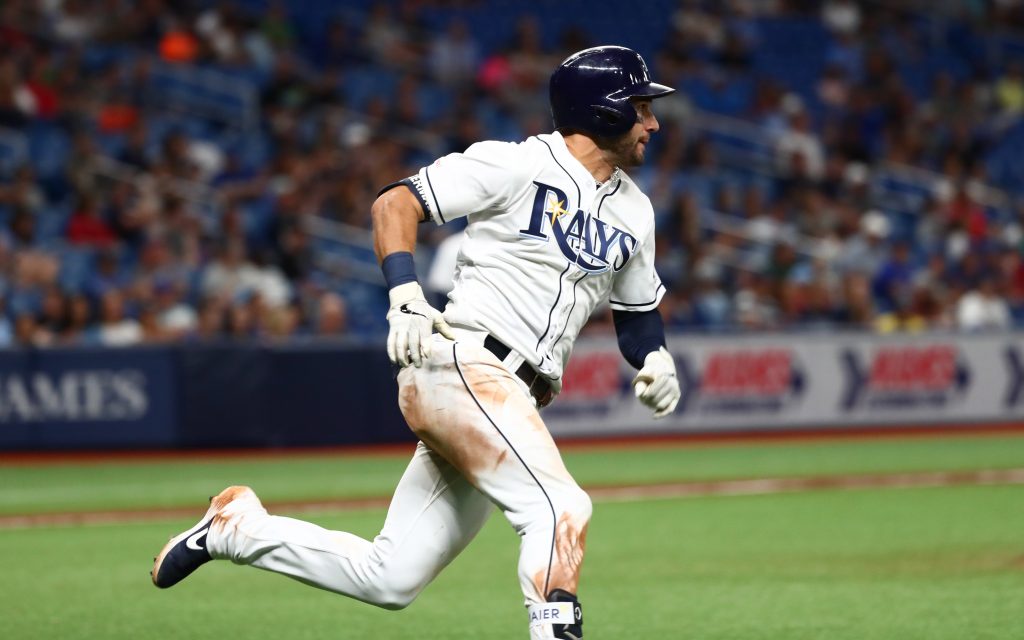 It isn’t often that a 31st-round draft pick even makes it to the big leagues, let alone enjoys a very successful Major League career.  Jake Arrieta, Aaron Judge, Chris Chambliss, Cecil Fielder, Andrew Benintendi, Brad Ziegler, and Hunter Renfroe are some of the most prominent 31st-rounders chosen over the years….except none actually signed after being drafted with these picks, as the selecting teams were taking long-shot fliers to see if they could entice these prospects into starting their pro careers early.

In terms of “proper” 31st-rounders, as in players who actually did sign after being drafted, there are a few notable names in the game today: Brewers reliever Brent Suter, Mariners reliever Matt Magill, and Red Sox catcher Jett Bandy (still in Boston’s organization as a non-roster invitee).  Plus, there is the other noteworthy active 31st-rounder, one who is on pace to become the best 31st-round pick in baseball history.

If you will, the Mount Rushmore of 31st-round selections…

And finally, there’s Kevin Kiermaier.  Hafner and Kiermaier are easily the most accomplished position players to ever come out of the 31st round, with Hafner holding an edge in career fWAR (22 to 17.5) over the Rays outfielder, though Hafner also has the benefit of 583 more career games.  As such, there’s still time for Kiermaier to overtake Hafner as — cue fanfare — The Best 31st-Rounder In Baseball History, which was a wholly unlikely scenario when Tampa Bay selected Kiermaier out of Parkland College in the 2010 draft.

Kiermaier made pretty quick progress through the Rays’ farm system, reaching Triple-A Durham by 2012 (albeit for just a four-game cup of coffee) and then hitting .295/.362/.431 over 571 combined plate appearances at the Double-A and Triple-A levels in 2013.  That performance earned Kiermaier his first ticket to the majors, in somewhat unusual circumstances.  Kiermaier made his MLB debut as a defensive substitute in the ninth inning of in the 163rd game of the Rays’ 2013 season, a tiebreaker with the Rangers to determine a wild card berth.  Tampa Bay won that game and then the actual AL Wild Card game over Cleveland, with Kiermaier again making an appearance as a late-game placement.

For a Rays franchise that has long been creative in trying to find roster advantages, using a postseason roster spot on the untested Kiermaier was perfectly logical.  After all, who better to serve as a defensive sub than the best defensive player in the organization?  (An honor officially conferred on Kiermaier after the 2013 season.)  While Kiermaier’s minor league numbers were good if unspectacular, he quickly gained notice due to his glovework, which has continued to be the case throughout his MLB career.  He is a three-time Gold Glove winner, as well as the winner of both a Platinum Glove and Fielding Bible Award in 2015.

Since the start of the 2014 season and over 4966 2/3 innings in center field, Kiermaier has 112 Defensive Runs Saved and a 14.8 UZR/150.  Among all other players in baseball with at least 4500 innings at a single position, only Andrelton Simmons is ahead of Kiermaier in both stat categories, with Mookie Betts also leading all players in UZR/150.  Betts’ excellence has come in right field rather than the more demanding center field position, and while I’m not going to make a claim that the amazing Simmons isn’t anything less than the best defensive player of his era, Simmons did accumulate his 144 DRS with the benefit of more than 2000 more innings at shortstop than Kiermaier has played in center field.

Though Simmons had a head start by beginning his career during the 2012 season, that big innings gap underscores Kiermaier’s issues in staying on the field.  From 2016-18, Kiermaier played in only 291 of 486 games due to a fractured left hand, a hip fracture, and a torn right thumb ligament.  He also had a brief injured list stint last season due to a thumb sprain, but overall, 2019 was a pretty healthy season for Kiermaier, as he appeared in 129 games and made 480 plate appearances.

All of these injuries during what would have been prime years surely haven’t helped Kiermaier’s consistency at the plate.  Over 847 PA in 2018-19, Kiermaier was a decidedly below-average hitter, batting just .223/.280/.386 with 21 homers.  These recent struggles dropped Kiermaier to a 98 OPS+ over his career, after he had managed a 107 OPS+ through his first 1734 PA.

To be clear, if Kiermaier is able to hit at even a 98 OPS+ level while still maintaining his superb defense and strong baserunning, he is still a major asset to Tampa Bay’s team.  “Asset” always carries a different meaning to the Rays than to most teams, however, given how Tampa is consistently trying to manage one of the game’s lowest payrolls.  It is also particularly applicable to Kiermaier given his status as one of the few higher-paid players on the roster.

Prior to the 2017 season, Kiermaier signed a six-year extension worth $53.5MM in guaranteed money.  The deal covered Kiermaier’s four arbitration years (he was Super Two eligible) and his first two free agent seasons, plus the Rays have a club option on his services for 2023 that could add another $10.5MM to the deal.  It was a rare instance of the Rays making a sizeable long-term investment in a player; Kiermaier’s deal is still the second-largest contract in franchise history, behind only the Rays’ 2012 extension with Evan Longoria.

At the time of the Kiermaier extension, the Rays were betting that they were gaining cost certainty on a borderline five-tool talent, given the hitting promise Kiermaier showed over his first three seasons.  Fangraphs’ value metric calculates that Kiermaier has been worth $51.1MM from 2017-19, already almost matching the cost of his extension, though he wouldn’t have earned close to that amount via the normal arbitration process.  In a world where Kiermaier doesn’t sign that extension, it’s possible that the always cost-conscious Rays might have simply non-tendered or traded Kiermaier (especially given his injury history) at some point rather than pay his increasing arbitration salaries.

Kiermaier only just turned 30 years old in April, so he can truly get the injury bug behind him, there’s still plenty of time to build on what has already been a very impressive career.  Becoming an elite-level center field defender is an incredible accomplishment for any player — for a 31st-round pick, it is downright astounding.  Kiermaier’s success stands out all the more in a year that will see the amateur draft reduced to five rounds, as who knows how much potential talent could fall through the cracks among the hundreds of players that would have normally been drafted over 35 additional rounds.  While a Kiermaier-esque success story is quite rare, it’s unfortunate that a possible next Kiermaier (or a next Hafner, or next Feliciano, or next Howell) might not even get a chance to get their career underway.