A look at what’s happening around the New York Jets:

1. Maye’s days numbered? The Jets drafted safety Ashtyn Davis with the 68th overall pick, the choice they received from the New York Giants in the Leonard Williams trade. Williams became expendable when the Jets used a high pick last spring on another defensive lineman, Quinnen Williams. This is what happens when a team drafts to a strength. In many cases, someone has to go.

There could be another Leonard Williams situation brewing and, ironically, it’s because of the Davis decision. His arrival raises questions about the long-term future of incumbent free safety Marcus Maye, the Jets’ 2017 second-round pick who is entering the final year of his contract.

Maye has been a solid player for the Jets, except for his injury-plagued 2018 season, but the economic realities can’t be ignored. The Jets are prepared to give a ton of money to Jamal Adams, and they would have one of the league’s highest-paid safety tandems if they double down with Maye. There’s nothing wrong with that, except they might decide it’s better to distribute their resources to other positions. Davis provides leverage and a contingency plan.

It makes no sense to trade Maye before the season — they’re not shopping him — but it wouldn’t be a surprise if they move him before the midseason trade deadline, as they did with Leonard Williams. If they do nothing, the Jets run the risk of losing him as a free agent with no compensation except perhaps a 2022 compensatory pick. It’s also worth noting that Maye, 27, is two years older than the typical player nearing the end of his rookie contract.

The Jets really like Davis; they were surprised he was available near the top of the third round in last month’s draft. If it weren’t for groin surgery last December, he would have blown up the NFL combine, according to some in the scouting community. Senior Bowl executive director and former NFL scout Jim Nagy believes Davis, a former track star at Cal, would have run the 40-yard dash in the high 4.3s or low 4.4s, which he said might have vaulted him into the first round.

“I thought he was the best single-high safety in the draft in terms of range and being able to play in the deep middle of the field,” said Nagy, adding that Davis has enough athleticism to play cornerback. “… To me, Ashtyn is an early-career starter, whether it’s Year 1 or Year 2. You look at his tape and that dude is a starting safety all day long. I know they have Marcus Maye and Jamal Adams. It’ll be interesting to see what [defensive coordinator] Gregg Williams does with him.”

The plan is to keep him at safety, which could make Maye the odd man out.

2. Scout’s notebook: As the head of the Senior Bowl, Nagy has a unique perspective because he scouts college games in the fall and sees the top seniors for a week in Mobile, Alabama. Four of the Jets’ nine picks played in the Senior Bowl. In an interview with ESPN’s Flight Deck podcast, he shared his opinion/projection for each player:

Denzel Mims, WR, second round: “You go back to Denzel’s tape at Baylor: In that league, they play a lot of soft man and zone coverage, so you didn’t see him get pressed. You didn’t see someone in his hip pocket and having to separate, which is where he made the jump in Mobile. You saw all that stuff. In one-on-one drills, he did a great job of shaking people at the line of scrimmage. … At the top of routes, he consistently separated and he made a bunch of crazy plays on the ball. There probably wasn’t a better guy during our week in terms of making contested [catches] and those acrobatic plays on the ball. … He’s going to be a really friendly target for [Jets QB] Sam Darnold.”

Jabari Zuniga, DE, third round: “The thing I like most about him is his versatility as a pass-rusher. He can threaten off the edge and he’s also a mismatch inside. He’s a guy you can move around and he can get to the quarterback from multiple alignments. I think his weight can go up and down. He’s one of those guys that has kind of a moldable body, so you can make him whatever you want to make him. … [He] has a slippery knack as a rusher. … It’s just unfortunate he couldn’t stay healthy this year. [Situational rusher] is the easiest path for him to get on the field.”

La’Mical Perine, RB, fourth round: (On Perine’s 4.6-second time in the 40) “I think speed and 40 times are the most overrated thing when it comes to that position. There are a ton of great 4.6 running backs that have played in the league. When I was with Seattle a few years ago, and Nick Chubb and those guys were coming out of Georgia, we did a study on 4.6 runners that have come out and, man, it’s like a who’s who of Pro Bowl lists. … Short burst is a lot more important — vision and burst. He’s got those two things. … He’s really good in the pass game. I was at the LSU game last year and he made a couple of ridiculous catches. I would expect him to be [Le’Veon Bell’s] top backup next year. We’ve seen midround running backs emerge as ‘the guy.’ It wouldn’t surprise me, in two or three years, if that’s what La’Mical Perine is for the Jets.”

Braden Mann, P, sixth round: “When we made our calls around the league last year about specialists, Braden was the consensus top guy. Everyone had draftable grades on him. … He’s not a real big guy, but he’s got a really big leg. … He’s a guy that I think is going to punt in the league for a really long time.”

3. Rookie log-in: The Jets are conducting a virtual rookie minicamp (break out the laptops, fellas) and will transition into full-squad meetings this week, meaning the rookies will join the veterans online. The league extended virtual offseason through the end of the month. 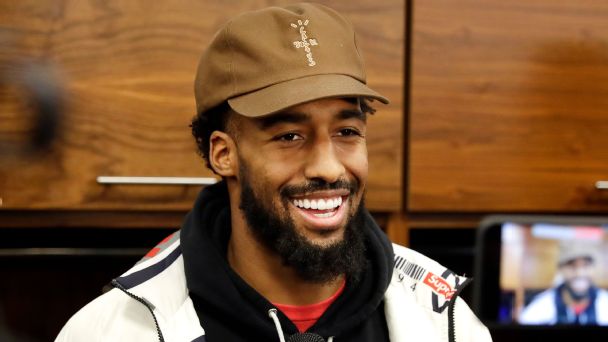 4. Line dance: The position group most affected by the coronavirus-related circumstances is the offensive line, which is losing valuable time to build chemistry. The issue is exacerbated by the dramatic turnover. The Jets have 16 linemen on the roster, including five new veterans and three rookies. Their opening-day lineup could be entirely different from the 2019 version.

The projected starters are No. 1 pick Mekhi Becton and George Fant at tackle, Connor McGovern at center, Alex Lewis and Greg Van Roten at guard. (Lewis cracked the lineup during the season.) The only possible holdover is Brian Winters, who will compete with Van Roten. Their chemistry needs to be better than last season, when at times they appeared to be social distancing from defensive linemen.

“It’s going to be challenging,” said Fant, one of the newcomers. “Offensive line play is all about being together, being on one page, and we’ve got a whole new room. The process is still going right now. We’re doing everything virtually. We’re just kind of talking, getting to know each other.”

Running back Le’Veon Bell took notice of the team’s effort to rebuild the line. “Absolutely,” he told ESPN colleague Jeremy Fowler in a text message. “Can’t wait either.”

5. Hard-line negotiator: A couple of contracts that were finalized several weeks ago finally were processed, and one of them was eye-opening. Linebacker Jordan Jenkins, whose one-year deal was widely reported to be worth $5 million, actually has a $3.75 million base value. This is a player with 15 sacks over the past two seasons and went into free agency seeking at least $10 million per year on a multiyear deal.

Two thoughts: The market crashed on Jenkins, who gets another shot next offseason. The other takeaway is that general manager Joe Douglas is a tough cookie at the bargaining table, which explains why the Logan Ryan talks are dragging out. Douglas isn’t about to get squeezed by a free agent with little leverage. Times have changed at One Jets Drive.

7. The last word: “I feel like [the AFC East] has always been open since we all put on our pads the exact same way. We wake up the exact same. I try not to lose focus on us. That’s what it’s all about. So, I’m not really thinking about Tom Brady. He has a team that he has to put together to make sure that they are ready to go. And we have to do the exact same. [The Patriots] have won more than we did, but it’s a new year. It’s a new time.” — Jets nose tackle Steve McLendon on how Brady’s departure affects the division.