At the forefront of the Miami Dolphins’ Mount Rushmore sits legendary coach Don Shula, who died Monday at the age of 90, and his long-lasting achievement of perfection with the 1972 Dolphins.

Nearly 50 years later, that period remains the golden era of Dolphins football and the greatest season any team has ever put together in NFL history. Shula was the demanding yet caring leader who made it all happen, and the stories behind the greatness remain vivid today.

On Saturday afternoon, NFL fans will get a chance to relive some of those memories, or maybe view them for the first time. It begins with a re-airing of Peyton’s Places: The Final Destination, which centers on Shula and the 1972 Dolphins along with Hall of Fame QB Terry Bradshaw (3:30 p.m. ET, ESPN2). 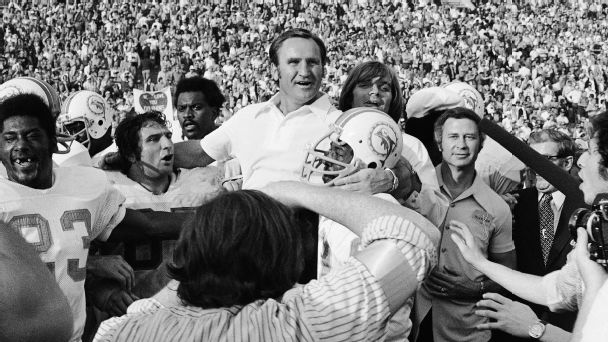 At 4 p.m. ET, ESPN2 will show highlights from the Dolphins’ Super Bowl VII victory against Washington to complete a 17-0 perfect season.

“Only one team can claim perfection — us. … Nobody gave us s—. We took it. Shula made sure we worked for everything we got,” said Hall of Fame fullback Larry Csonka, who is featured in the Peyton’s Places episode and was a prominent member of the 1972 Dolphins. “We took the hilltop and put the flag up. Now anybody is welcome to join us. But there will be two of us, and we will always be the first.”

That 1972 team was led by Csonka and Mercury Morris (who became the first teammates to each rush for more than 1,000 yards in a season), quarterback Bob Griese and a unit that was coined the no-name defense. Each season, when every NFL team has lost at least once, Miami’s 1972 team celebrates being the only perfect team in league history. Shula was that team’s leader and simply put, he was a winner.

“He knew how to turn adversity into success. We saw that after we lost Super Bowl VI. The very first day we reported to training camp the next year, he brought us all together to watch the game and grilled us on our mistakes,” said Morris, who is featured in Peyton’s Places. “He said, ‘See how sick you feel now? Just think how sorry you’ll be if you don’t redeem yourself this year.’ And we did, winning every game we played.”

Shula, the winningest coach of all time, had a knack for inspirational speeches, and he told his players following the perfect season that to validate their success they had to do it again.

4:30 p.m. ET on ESPN2, fans can watch the 1973 Dolphins’ far less-hyped Super Bowl VIII victory against the Minnesota Vikings to secure back-to-back titles. Hall of Fame guard Larry Little, a prominent member of both Dolphins championship teams who is featured in Peyton’s Places, argues that Miami’s 1973 team was better than the 1972 squad.

In celebrating Shula’s life, remembering some of his greatest coaching accomplishments seems an ideal way to spend 1 1/2 hours on a Saturday afternoon.

“He was the driving force behind everything we accomplished with the Dolphins,” Griese said. “Whether it was his force of will, his organization, his work ethic, sense of integrity or his total focus on winning, he molded us into champions. And the entire time he was doing that, he served as a role model for all that was right in sports. While he started out as my coach, over time he became more than that. He became a mentor, and even better, a great friend.”