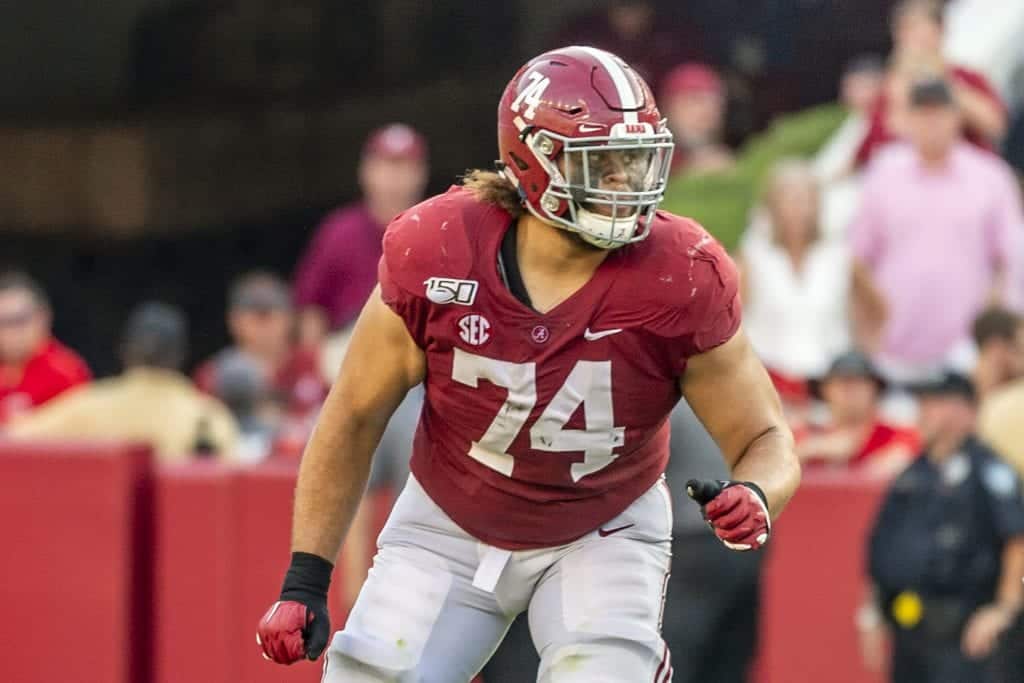 The Cleveland Browns entered the 2019 campaign with budding optimism. Their talent-laden offense, led by ascending second-year signal-caller Baker Mayfield, was expected to complement a young, talented defense that suddenly boasted a bevy of enticing building blocks. Playoff aspirations felt like a foregone conclusion. The season quickly spiraled out of control, however, as the offense stalled and the defense struggled to come up with timely stops and turnovers.

These types of seasons typically breed change, and this change came in the form of Kevin Stefanski, the brilliant offensive mind behind much of the Minnesota Vikings’ recent success. Stefanski will be tasked with doing something that his predecessor Freddie Kitchens failed to do a season ago — establish cohesiveness on both sides of the football and continue to develop young talent. Based on the Browns 2020 draft grades, is he on the right track?

Who did the Cleveland Browns draft?

How exactly did a star-studded Browns offense constantly sputter week in and out, often appearing stagnant and laboring its way down the field? Well, there are many variables that can be attributed to that, but perhaps their most glaring deficiency started up front in the trenches.

Jedrick Wills is the perfect fit for a Browns team in desperate need of a versatile, plug-and-play lineman. Though he doesn’t have great length at 6-foot-4, 312 pounds, a case could be made that Wills is one of the most athletic offensive line prospects in his class. Not only did Wills demonstrate his burst at the NFL Scouting Combine, running a 5.05 40-yard dash, but he also showcased his athleticism, recording a 34.5-inch vertical and a 113-inch broad jump.

Wills’ best trait is his quickness; when it comes to fluidity and range on the offensive line, there simply isn’t a prospect in the 2020 class better equipped than the Crimson Tide product. What he lacks in length, Wills more than makes up for it with his flexibility, lateral movement, and sound technique. He gives the Browns the versatility to line up at tackle or guard in 2020, but will likely assume the left tackle post, serving as a bookend opposite from new addition Jack Conklin.

Throughout much of the pre-draft process, LSU’s Grant Delpit and Alabama’s Xavier McKinney were universally regarded as the draft’s top safety prospects, with many pundits deeming them worthy of Top-25 selections. Thus, to say I was surprised to see Delpit fall to pick No. 44 would be an understatement.

Delpit adds a physical demeanor to a suddenly talent-laden Browns secondary. While he lacks the ideal range in coverage, he has the instinctiveness and athleticism to develop that aspect of his game. His calling card is his effectiveness around the line of scrimmage, where he often acts as a heat-seeking missile in pursuit of the football. Perhaps the smartest center fielder in the 2020 class, Delpit has the tools to develop into an eventual All-Pro talent.

Last year, the Browns added Greedy Williams to play opposite Denzel Ward at cornerback. Now, they’ve landed a first-round caliber safety to solidify the middle for the next decade.

To be clear, I didn’t think the Browns truly reached on any of their picks. So, due to the fact that I was higher on Elliott than the consensus, I’ll go with Elliott.

If there were any knocks on Elliott’s game, it’s that he experienced little production as a pass rusher, and his reactiveness sometimes takes him out of plays. The feeling here is that the Missouri product must add a broader range of pass rush moves to his arsenal in order to flourish in that aspect of his game.

While there are a few concerns about the prospect, I am of the belief that Elliott is still very much a developmental player that has yet to scratch the surface of his capabilities. He has superhuman strength that cannot be taught, and his quickness and hand usage figures to translate well at the next level.

We knew the historic class of wide receivers would inevitably push talent down the draft board, but few could have foreseen Donovan Peoples-Jones’ draft day skid.

A third-round prospect due to upside alone, the 6-foot-2, 212-pound pass-catcher isn’t particularly known for his explosiveness off the line or downfield speed. In fact, he could very well struggle to separate from NFL defensive backs with regularity if his route running never catches up to his intriguing physical traits.

That said, there is plenty to like in Peoples-Jones’ physical traits. His frame enables him to play ‘above the rim’ and attack the catch point, making him an intriguing red zone option as a rookie. He likely doesn’t have the requisite speed or burst to evolve into a consistent perimeter option, but his size and physicality could serve him well in the slot. Peoples-Jones is an immensely raw talent, but he gives the Browns a lot to work with from a skillset standpoint.

For a sixth-round pick, that’s all you can really ask for.

When assessing the Browns’ roster prior to the draft, it was apparent that a greater emphasis should be placed on fortifying the offensive line, and they came away with what some believe to the top tackle in the class early into opening night. I am a big fan of what they did on Day 2 as well, landing Delpit to strengthen the back end, effectively adding him to one of the more alluring young secondaries in the NFL. Jordan Elliott will almost certainly be in the mix for significant playing time — or perhaps even start.

Day 3 was a home run for the Browns, selecting Harrison Bryant to work in tandem with David Njoku and Austin Hooper, giving the Browns a group of athletic tight ends for more 12 personnel. Washington center Nick Harris offers starter upside, and was tremendous value in the fifth round, while the aforementioned Peoples-Jones has the raw traits to become a matchup nightmare.