In the 1980s, television made stars — and money — all across the college football landscape.

Jackie Sherrill landed the first million-dollar contract at Texas A&M in ’82. There was even more bombast, from Barry Switzer’s Oklahoma teams to the camo-clad Miami Hurricanes under Jimmy Johnson. And at SMU, those factors combined in the form of a slush fund — that included payments by the Texas governor — to earn the Mustangs the death penalty in 1987.

Bo Schembechler may have still been focused on “The team. The team. The team.” until his retirement in 1989, but let’s revisit the decade when TV turned regional heroes into national celebrities and the individuals started to shine brighter. When kids asked for haircuts like Oklahoma’s Brian Bosworth. When Deion Sanders’ wattage turned him into Prime Time. When Bo Jackson and Herschel Walker became one-name mythical characters.

Here are our favorite players from the 1980s:

Mark Schlabach: Herschel Walker
Walker should have won the Heisman Trophy as a freshman in 1980 (when he ran for 1,616 yards and led the Bulldogs to a national title) and as a sophomore (1,891 yards) before he finally did win it in 1982 (1,752 yards). If he’d stuck around for his senior season, he would have won a second one. With all due respect to Eric Dickerson, he wasn’t half as good or strong as Walker. During his junior season in December 1982, while Walker was out on his morning run, he encountered a car accident, in which the driver was trapped in an overturned car. Walker burst out of a crowd, grabbed the door and jerked it with a “single mighty wrench,” according to a United Press International report. “It shocked me how it came loose,” an onlooker told the UPI. “He got ahold of something because he just ripped that thing loose. I had pulled on it before and couldn’t budge it. He just ripped the door open, glass shattered everywhere and then we got her out.” The man told the UPI he didn’t recognize Walker at first. “It’s like you look up and there’s John Wayne helping you,” the man said. That’s what pushups and situps can do for you, boys and girls.

Adam Rittenberg: Brian Bosworth
The Boz. I didn’t truly get into college football until the early 1990s, but I knew about Oklahoma’s Brian Bosworth. He was one of the first nationally branded players, especially as a non-quarterback. He had the look, the hair, the mouth and fearlessness, both in how he played and what he said. The Boz was one of college football’s first reality TV stars. The two-time Butkus Award winner and two-time unanimous All-America selection did a lot of great things on the field, but the image he created — both good and bad — is what sticks with most of us who remember him. 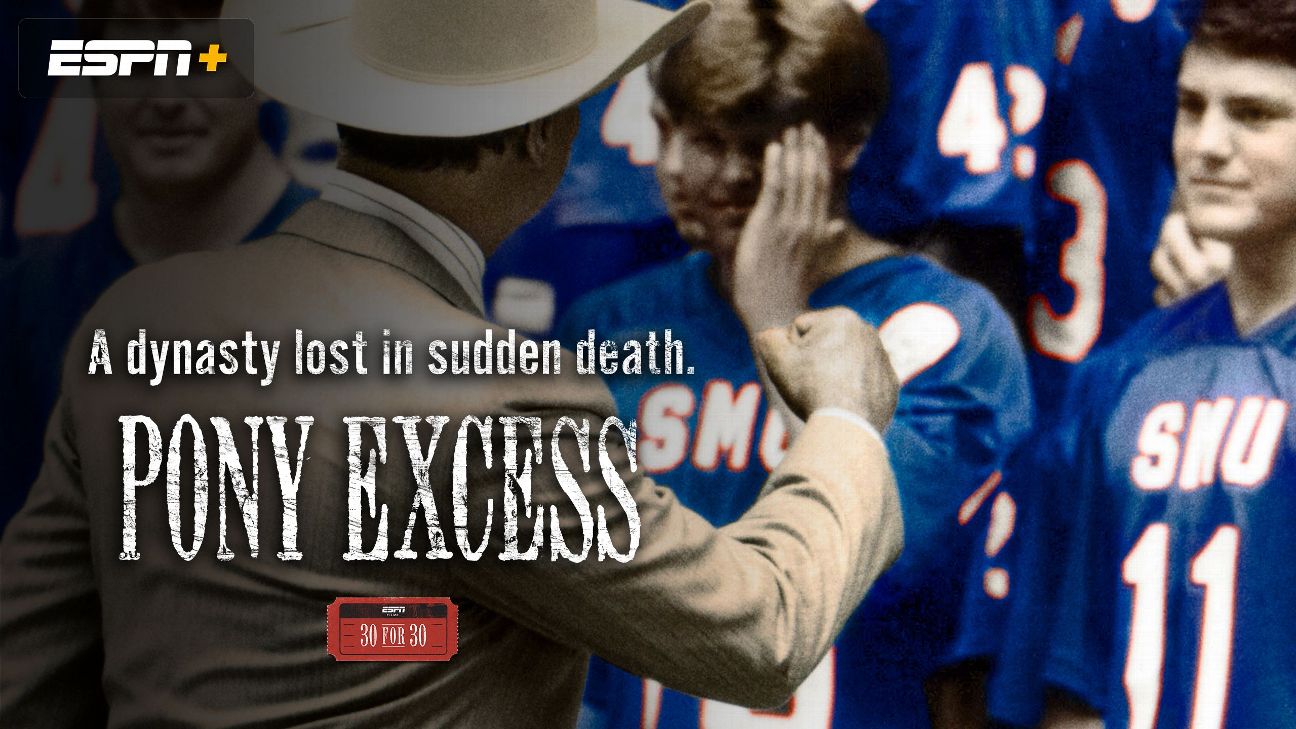 In 1987, the NCAA issued the “death penalty” on a college football program for the first and only time in its history. Watch on ESPN+

Dave Wilson: Eric Dickerson
SMU’s Dickerson symbolized the neon excess of the 1980s and the Texas bravado of the Southwest Conference’s Wild West days. He was cocky and fast, attended a preppy private school and drove a car that somebody else bought for him. (He’ll forever say — with a wry smile — that his grandmother bought that Trans Am.) Dickerson lived up to every bit of the hype after a legendary Texas high school career, rushing for 3,045 yards and 36 TDs combined for the Mustangs in 1981 and ’82 despite alternating every series with Craig James in the “Pony Express” backfield. He never lacked for confidence. Though he finished third in the 1982 Heisman voting to Herschel Walker and John Elway (averaging 7.0 yards per carry to Walker’s 5.2), Dickerson was unfazed. “I think I’m as good or better than Herschel,” he told The Washington Post.

Ryan McGee: Barry Sanders
With all due respect to Herschel and Bo, no other player made us ditch our Saturday night dates to jump in our cars and race to whatever TV we could find to watch the SportsCenter highlights of whatever Barry Sanders had done that day in Stillwater. The way that Herschel and Bo ran the ball was classic. What Sanders did was straight out of a video game. No one has run like that before or since.

Sam Khan Jr.: Andre Ware
As someone who was born in the early 1980s, I didn’t get to see many of those players live, but the first one I vividly remember was Andre Ware. My dad took me to the Astrodome to see the Houston Cougars play, and that was my first in-person experience with college football. To see Ware throw beautiful parabolas all over the field and the Cougars’ high-powered run ‘n’ shoot offense light up the scoreboard was quite the introduction to the sport. Ware was a wonder, and he and the Cougars were on the front end of what would turn out to be an offensive revolution in the sport. Later, when I became a teenager, the first college jersey I owned was Andre Ware’s. 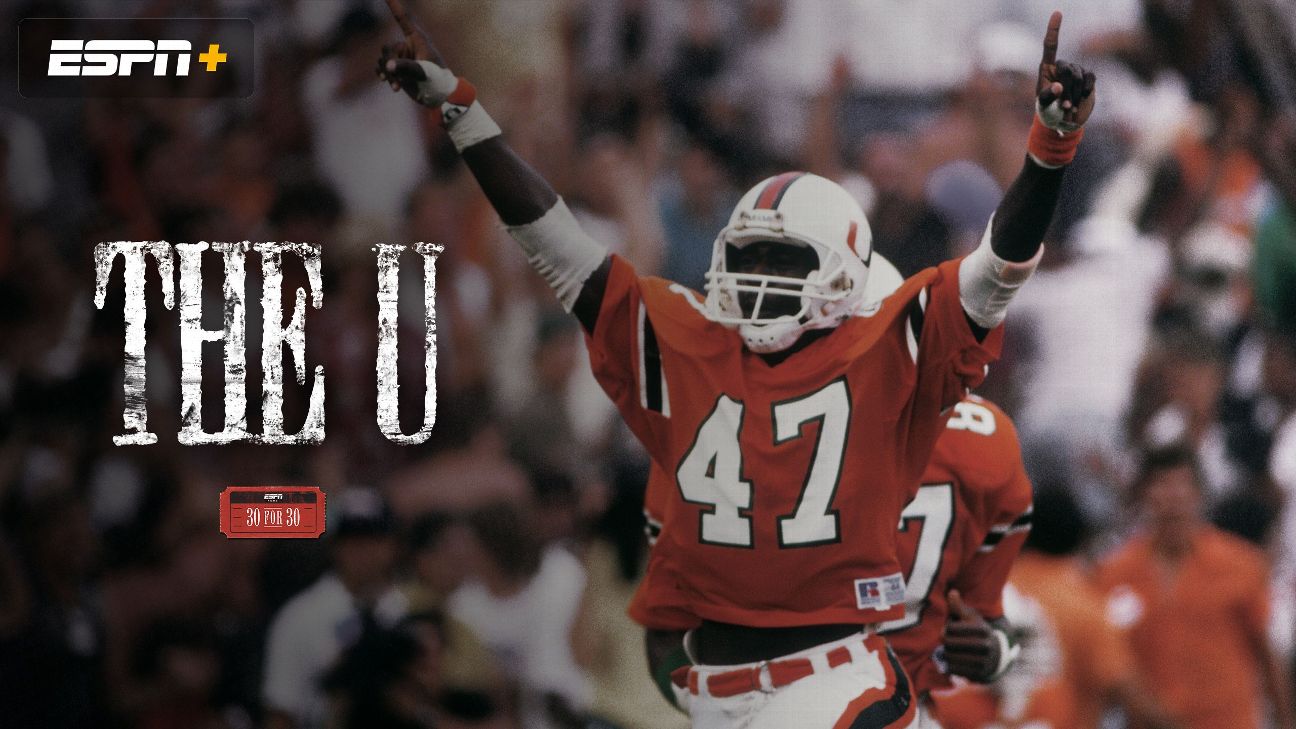 Long before hip hop culture filled our airwaves, the Miami Hurricanes brought street values and hood bravado into America’s living room and a serene campus was transformed into “The U.” Watch on ESPN+

Andrea Adelson: Michael Irvin
I consider myself among the most fortunate people in the entire country, because I grew up in Miami during the 1980s at the height of the Hurricanes dynasty. I could probably list off so many obscure Miami Hurricanes from the 1980s to fit this category (Melvin Bratton signed my shoe when he came to my elementary school and I never wore it again), but my favorite player from that era is Michael Irvin. I loved his swagger, I loved how he played the game, and I loved how the white towel he used to wear hanging off his uniform would flap wildly every time he ran down the field. Watching those Miami teams made me want to write about sports, so a big shoutout to the Hurricanes and Michael Irvin for helping this little girl live out her dream.

David Hale: Deion Sanders
My recollection of the 1980s college football world isn’t exactly vivid, but there’s no doubt about the first name that pops into my memory: Neon Deion. The decade would produce some legitimate crossover superstars from The Boz to Bo, but nobody did it with quite as much pomp and gravitas as Deion Sanders. Not only did Sanders put Florida State on the college football map, kicking off a quarter century of excellence, but he was a legitimate household name, two-sport star and nationwide celebrity before he ever earned a paycheck. Just watch “Seminole Rap” for the evidence of his 1980s, cheese-filled greatness. The only regret is that social media wasn’t around to truly archive how amazing Deion was — on and off the field.

Chris Low: Herschel Walker
Come on, this is a no-brainer. Not only was Herschel Walker my favorite 1980s player, but he’s the best college football player I ever saw play. Back in those days, you just didn’t see running backs weighing 225-230 pounds with track speed. Herschel ran over linebackers and ran past defensive backs. Go back and watch the top-15 matchup with South Carolina and George Rogers in 1980 when Herschel was a freshman. The safety had the angle on him, and Herschel turned on the jets, hit the sideline and made the DB look like he was running in quicksand on his way to a 76-yard touchdown run. “Oh you Herschel Walker!”

Bill Connelly: Keith Jackson
The Oklahoma tight end, not the announcer. I was 7 years old when Oklahoma won the national title in 1985, so I didn’t fully comprehend what a unicorn he was until years later. He was just unfair. OU reestablished its wishbone bona fides that year when Jamelle Holieway took over for an injured Troy Aikman at QB, and once they had you hypnotized and a step behind against the option, they daggered you with Jackson. In his career, he had only 86 combined catches and carries, but those 86 touches produced 1,859 yards and 19 touchdowns. He averaged 24 yards per catch and 14 yards per CARRY, an average admittedly bolstered by an 88-yard end around against Nebraska in ’85.

To repeat: A tight end listed at 6-2 and nearly 260 pounds took a reverse 88 yards against the Black Shirts and a Nebraska team ranked second in the country at the time. Totally normal.

Harry Lyles Jr.: Tim Brown
I wasn’t around to actually see anybody play college football in the 1980s, but as I grew up in Atlanta, the legend of Herschel Walker was talked about as much as any current player. While Walker would be my easy answer, I’m going to go with Tim Brown. I’m a sucker for good wide receiver play, and in his Heisman season in 1987, he caught just 39 passes but averaged 21.7 yards per catch. When he got the football in his hands, he made the opportunity count.

Tom VanHaaren: Barry Sanders
I grew up in a suburb of Detroit, so Barry Sanders was my favorite player growing up, period. Once he was drafted by the Lions, we got to learn about his time at Oklahoma State and see some highlights of his college career, which were incredible to watch as a kid. We all used to try to replicate his moves in the backyard, but the things he was able to do on the field were jaw-dropping. He was a complete magician — thinking he would be tackled for a loss then watching him slip out of a tackle and run for a 20-yard gain was always a spectacle. In my opinion, all things considered, Barry is the best running back to ever play the game. He had 2,628 yards in his final season in college with 37 rushing touchdowns. If you include the bowl game that season, he had 2,850 yards and 44 touchdowns, which is incredible in itself. He set 34 NCAA records that season and went on to be an unbelievable player in the NFL. You can’t convince me otherwise that he isn’t the GOAT.

Ivan Maisel: Don McPherson
In 1987, I left Manhattan, where I had worked for five years and where my girlfriend lived, and covered national college football for The Dallas Morning News. It had been 20 years since Syracuse had won as many as eight games. No one expected the Orangemen (as they were then known) to escape mediocrity. But they won their first five games. I believed in Syracuse. Did I mention my girlfriend lived in New York? Did I mention she grew up across the street from the Syracuse campus? Here came No. 11 Penn State, which had beaten Syracuse 16 straight years. On the first play from scrimmage in a sold-out, already noisy Carrier Dome, Syracuse quarterback Don McPherson dropped back and threw an 80-yard touchdown pass to freshman Rob Moore. You could hear the roar clear up to Watertown. Syracuse won 48-21. McPherson became my guy. He led Syracuse to an 11-0 regular season and the Sugar Bowl. He finished second in the Heisman voting to Notre Dame wideout Tim Brown — a travesty. McPherson made me look like I could spot a dark horse. By the way, I married the girl.