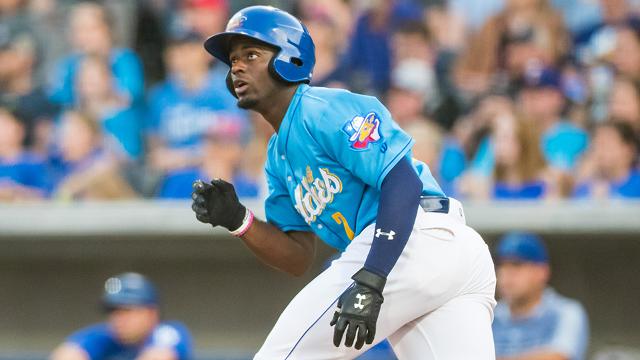 Taylor Trammell learned a lot over the past year. How could he not have? His fourth season of professional ball in Double-A Chattanooga kicked off with a ranking as Cincinnati’s top prospect, continued with a trade to San Diego and concluded with a go-ahead grand slam that led Amarillo to a Texas League championship in the team’s inaugural season.

But to Trammell, the most important lessons extend much deeper than any of the individual memorable moments of his whirlwind year. Through much of 2019, the Georgia native struggled offensively, finding it difficult to play at a consistent level. His combined .689 OPS was significantly lower than the .781 mark he produced in 2018, and his average sat at .234 — nearly 45 points below his previous low of .277.

That was uncharted territory for the 22-year-old, who skyrocketed to success after being selected in the competitive balance round by the Reds in 2016. The highly touted outfielder delivered at every level over his first three seasons of pro ball, earning a promotion each year and two trips to the MLB Futures All-Star Game — including a 2018 appearance in which he was named the contest’s Most Valuable Player.

So when 2019 started to treat him harshly, Trammell wasn’t quite sure what to make of it.

“I never like to call them ‘slumps,’ but you get into these ruts,” MLB.com’s No. 28 overall prospect said. “I would have three great games, then say ‘OK, I need to continue to do this or continue to do that.’ Now I’m in a rut. I was trying to do too much.”

Although a left hamstring strain in the first half of the season may have contributed to his production decrease, Trammell’s main dilemma was a sudden inability to make solid contact. His slugging percentage with the Lookouts dipped to .336 and his on-base percentage wasn’t much better (.349).

Then, hours before the July 31 Trade Deadline, news broke. Trammell was headed to San Diego as part of a three-team deal with Cleveland. It was just what he needed — a fresh start.

“When I found out I was traded to the Padres, I got really excited,” he said. “I had already seen a lot of good things through this organization.

“A nice change of scenery is good. It’s not something you should rely on, but for me, it was something where I could let loose and be myself. I put too much pressure on myself. … I was trying to do way more than I needed to do, and it showed.”

So Trammell committed to making the trade a turning point. He wasn’t successful at first, however, continuing to self-apply pressure, now out of eagerness to impress his new organization. As a result, he posted a .214/.296/.321 slash line in his first month with the Sod Poodles.

Amarillo, nonetheless, was headed to the playoffs. Trammell had been to the postseason each year since turning pro, but had never been a part of a championship team. He wanted to change that, but knew he would have to play much better than he had been for the Sod Poodles to succeed. Then, it clicked.

“The mental aspect of the game is the most important,” he said. “For me, [I realized] it’s about not thinking about things.

“Curtis Granderson, one of my favorite baseball players of all time, once said in an interview that he writes in his hat, ‘Don’t think, have fun.’ I sat there, and I realized when I’m doing well — I’m continuously making hard contact with the ball, great plays in the outfield and being a great teammate — I’m not thinking about anything. I’m just having fun.”

So that’s what he did. Instead of overanalyzing his performance and mentally micromanaging how he played, Trammell reset. Regardless of the playoff atmosphere, he made sure to relax. He made sure to have fun.

The result? A .310 average and .998 OPS through the postseason, and a ninth-inning grand slam in the winner-take-all game against Tulsa in the Texas League Championship Series.

Fast forward to February, and Trammell is preparing for his third taste of the Cactus League. This year, he’ll be in Peoria as one of 29 non-roster invitees for the Padres. He’s listed as the organization’s second-ranked prospect. He’ll join many of his Double-A teammates, including top prospect MacKenzie Gore and third-ranked Luis Patino, to highlight a powerful potential core in San Diego’s farm system. And, most importantly, he’ll pack confidence and lessons learned from a season he has no interest in repeating but won’t be forgetting any time soon.

“I’m glad I went through that trial that happened last year,” Trammell said. “I’m glad it happened. When I get to where I want to be in my career, that’s something that I can look back on and know it brought the worst out of me. Then I can remember to be myself and stay true to who I am. Rather than having this hurt me, I think it’s helped me more than anything.”

Position players are scheduled to report to Peoria by Feb. 18. Trammell is already in Arizona. While there are obviously performance-related accomplishments he’d like to achieve this spring, he’s focused on effort rather than results. And he’s confident the rest will fall into place.

“I don’t have too much pride to not admit that I could’ve done better [last year],” he said. “But I’m also going to take it with a grain of salt and know this is something I’m going to learn from.

“It sounds cliché, but for me, personally, I don’t think I’ve ever looked myself in the mirror and said. ‘I could’ve done more.’ I leave it all out on the field, and that’s the mentality that I’m bringing into Spring Training. I don’t want to leave any doubt in anybody’s mind that I didn’t give it my all. … If you take anything from this, just know I, Taylor Walter-Lee Trammell, want to win.”

Katie Woo is a contributor to MiLB.com. Follow her on Twitter @katiejwoo. This story was not subject to the approval of the National Association of Professional Baseball Leagues or its clubs.