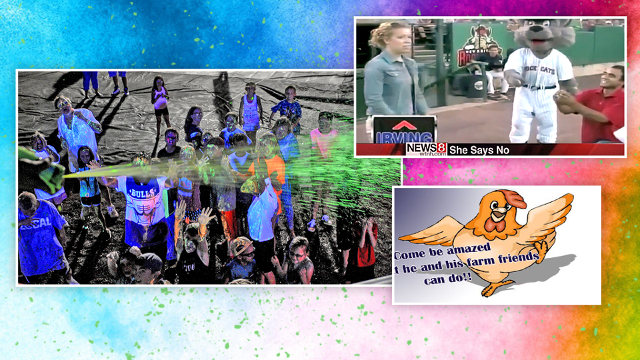 If you work in a Minor League Baseball front office, then you are intimately acquainted with feelings of failure. Over the course of 70 home games per season, not everything will go as planned.

When it comes to promotions, in particular, the awry is inevitable. Theme nights, giveaways, fireworks, celebrity guests and between-inning contests make for a barely controlled cavalcade of moving parts that can sometimes descend into a carnivalesque theater of chaos. But failure breeds character — and it also breeds the best stories.

Last week, on Twitter, I asked those who work — or have worked — in Minor League Baseball to share their tales of promos gone wrong.

Do you work/have you worked for a MiLB team?

Have you played a role in staging a promo that totally bombed/did not go as planned?

Want to talk about it for a (potential) upcoming article?

What follows is a small sampling of the responses that I received. There’s plenty more where this came from, to the extent that this article may eventually merit a sequel or three. If you have a story to share, please get in touch.

Eric Leach, general manager of the Bowling Green Hot Rods, summed it up well: “Promotions always teeter between brilliance and disaster.” This dichotomy was on full display during his team’s 2016 season.

In July, the Hot Rods suited up as the Bootleggers as part of a promotion that went on to win the “Promo of the Year” MiLBY Award. One month later, the Hot Rods staged a postgame “glow paint rave party.” The intended audience was students from nearby Western Kentucky University who had just returned for the fall semester. The first 1,000 fans received neon painter’s-style hats.

“Significant money was invested in the promotion,” Leach wrote in an email. “We marketed it for weeks on the college campus via social media, with our interns working the student housing, sororities, fraternities and so on. As the day approached and ticket sales weren’t great, panic began to sink in. But, alas, they’re college students so they wait until the last minute, right? It will be a huge walk-up crowd. The game day came. … No walk-up crowd of college students at all! We had four international students buy tickets and they were so confused that there wasn’t a rave crowd to be had. What we did have was 20 to 30 [6- to 10-year-olds] who thought it was the greatest thing ever. Had we marketed to kids and played Teletubbies music with a little Wiggles mixed in we might have stood a chance. What was supposed to be a 45-minute party mercifully ended after about 20 minutes, when the young ravers ran out of steam and mom and dad had enough.”

Bowling Green’s postgame glow paint rave party, such as it was.

Candles in the wind
Larry Doby Heritage Weekend is an annual Charleston RiverDogs tradition, as the team celebrates the life and legacy of the first African-American to play in the American League. RiverDogs promotions director Nate Kurant attempted to add a new element to this promotion in 2016: a postgame 1,000-candle ceremony.

“Decent idea, bad planning, tough execution” is how Kurant summed up the experience.

“The idea was to essentially make it like a Christmas Eve candlelight church service, to start with one candle and then spread around the stadium,” he wrote in an email. “A symbolic visual of how the power of one person can be a light, and the impact that light can have. Again, a decent idea. However, we overlooked in the planning that this would be in June. With a 6 p.m. first pitch, there was a chance that it might not be completely dark by the time the game ended.

“On game night, the RiverDogs got a gem from the starting pitcher. I believe it was now-Seattle Mariner Nestor Cortes. Whomever it was, the game took a little over two hours, meaning we were doing a candlelight ceremony at about 8:10 p.m. in the middle of the summer. It was bright! It also happened to be breezy, so for the few dozen that stayed to be a part of the daytime candle service, keeping the candles lit was an adventure. One of many failure stories I’ve earned over the years.”

Get the chopper!
As their team name would indicate, the Omaha Storm Chasers are no strangers to wild weather. But following one game in 2017, the team was caught off-guard by surprisingly strong wind — some if it man-made.

On this evening, the Storm Chasers were staging a postgame helicopter ball drop. Three kiddie pools were placed on the field; the plan was to have the helicopter dump several garbage bags’ worth of soft baseballs into the pools as it flew over the field. Each pool represented a different section of fans. The pool with the most balls in it would win a prize for the section of fans it represented.

“We had placed five-pound weights in each of the pools,” said Storm Chasers marketing and promotions manager Andrew Asbury. “The person in the helicopter was going to let loose with several trash bags full of these Softee baseballs. But as the helicopter approached, the kiddie pools got blown away. The downdraft from the helicopter picked them right up. Everyone [in the crowd] is shouting and jeering. [General manager] Martie Cordaro is on the mic. He’s yelling at me to help with the pools, but I was scared of the helicopter. Finally, we have four staff members literally holding them down by hand. Some are on all fours, with at least half their body inside. We got the pools situated, and then the first bag of balls totally missed all of the pools. Fortunately, they still had a few more bags and we were able to determine a winner.

“Those five-pound weights didn’t cut it. Next time, maybe we’ll put staff members inside with goggles on and just have them sit there. … Not to be cliche, but, hey, welcome to Minor League Baseball. Anything that can happen will happen. You put on these wacky promos all day every day for all your games, and the unexpected happens.”

The Storm Chasers’ helicopter mishap, and other behind-the-scenes stories, is told in episode eight of the team’s “Between Two Berms” podcast.

Fowl play
Do you remember the Chickenman? Per a 2005 newspaper article, he was a touring performer who “makes presentations to children of all ages using trained chickens combined with storytelling, comedy, music and recorded video.” In 2010, the Lowell Spinners decided to book the Chickenman for a two-night stint at the ballpark. Jon Boswell, then the team’s director of media relations, remembers it well.

“So Chickenman rolls into town with his trailer full of fowl, and we go over the script,” Boswell wrote in an email. “Game time rolls around and the first break comes and it is … awkward. Chickens aren’t quite Frisbee Dogs or Cowboy Monkey Rodeo. There were chickens flipping on poles, riding in remote control cars. … There’s been worse. But we also have the Chickenman mic’d up and his additions to the performance are … awkward. By the time his final in-game break comes, I’m praying for rain to wash away the next game. Then he gets out there for the postgame ‘kids run the bases’ and he has a rap to go with the performing chicken, and I’m pretty sure he was booed.

“But for me, the reason I never forget his performance is because we had booked the Chickenman at the team hotel. The following homestand, I called over to add a room for a player’s family and they were booked up. The manager asked if we knew when the Chickenman would be leaving. This was six days after his last performance. Come to find out, the Chickenman enjoyed Lowell so much that he extended his stay at the hotel on the team’s credit card. Chalk that up as a learning experience.”

Oh, the irony
These days, Ryan McGee is a senior writer for ESPN and co-host of the popular NASCAR-themed “Marty and McGee” podcast. But back in 1994, he was an intern for the Asheville Tourists. Via a Twitter direct message, McGee relayed one of what he said were many memorable moments from that season:

“We had a rainout with no rain. Tarp had been poorly pulled the night before and it rained early in the day, so the infield was all messed up. Our lone city-employed groundskeeper was out of town. We had a line of people we had to turn away, trying to explain to them that the field was too wet to play due to rain, all while they stood in line at the gate under clear skies and sunshine. Just beautiful warm weather. And why was there such a long line waiting for the gates to open? It was Umbrella Night.”

Do’s and don’t’s
In Minor League Baseball promotions, as in life, the line between success and failure can be razor thin. Sometimes what was initially seen as a failure comes to be viewed as success; sometimes the opposite is true. All of this is to say that, in 2013, the New Britain Rock Cats embarked on an emotional roller-coaster ride of their own devising. They succeeded, failed and ultimately succeeded. Or at least that’s one way to look at it.

“In August 2013, we put two employees on the field dressed in regular street clothes for a between-innings trivia promotion,” Abramson wrote in an email. “The plan was a skit we’d rehearsed, where the man would ask the women to marry him ‘unexpectedly’ and she would say no and run off the field. We wanted to try to create a viral video with it. We executed the promotion as planned, people in the stands were clearly shaken, and later that night we created a YouTube channel and Twitter account and leaked it. Within a few days, it had over a million views. The story was covered all over the world.

“For some reason, we thought it was a good idea to come clean and let people know it wasn’t a failed proposal but a stroke of marketing and execution genius. It backfired. The story once again was covered all over the world, but as a ‘scam’ and a ‘hoax.’ People were outraged, clearly crazy, and I received multiple email death threats. Which all struck me as extreme. I did, however, follow up with every single person who complained and converted eight of those complainants to season-ticket holders. We also sold out the final eight games following the ‘failed’ promotion due to all the exposure.”