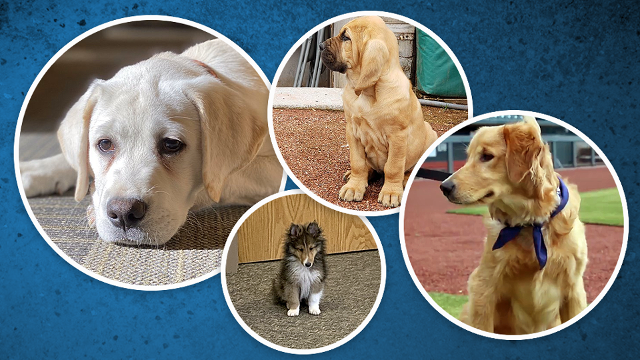 Bat dogs stole the baseball spotlight last spring after Finn, of Triple-A Las Vegas, had to work overtime to fetch a bat thrown by a Pacific Coast League umpire. Finn’s video went viral and inspired us to track down all the other hardworking dogs of baseball. (You should also probably check out this very important story about bat dogs from MLB.com.)

The pack is getting even bigger this year as four new dogs are getting ready to roam the fields of Minor League stadiums. Get to know the 2020 rookie class!

Napping my way through Friday pic.twitter.com/y4HUwPYwJg

I already got this bat dog thing down pic.twitter.com/sMggJTPbJ7

Cooper joined the Double-A Tennessee Smokies’ staff in December and wasted no time jumping on the field. It’s unclear if Coop, a bloodhound, will have bat-fetching duties or will just watch the action:

Henley is off to a fast start, already rolling around in the grass at Class A Columbia:

Shoutout to our groundskeeper for getting a puppy ?

The Class A Burlington Bees hired Ozzie to take over as the team’s “director of fur and canine relations.”

Today, we welcome the Bees new Director of Fur and Kanine Relations…Ozzie. Ozzie looks forward to spending his days in the Bees office and roaming Community Field for pupper romps. pic.twitter.com/6v95adMtiE

We wait for Fridays like Ozzie waits for his bowl to be filled at lunchtime…and we’re both saying “where ya at?” pic.twitter.com/Spprbjkkbg

Finn the Bat Dog has more than 27,000 followers on Twitter thanks to his fame in Las Vegas. (Josh Holmberg)

Ollie the Bat Dog worked many summers in New Hampshire before his retirement in 2018. He’s the brother of former Trenton bat dog Derby and the uncle of current Trenton bat dog Rookie, and he occasionally comes out of retirement for special appearances. (Kevin Pataky/MiLB.com)

We also have a very special guest today. Ollie the bat dog will be joining us! pic.twitter.com/iJWvcq3Cxq

Here’s Rookie, Trenton’s current bat dog, who follows in the pawprints of his grandfather Chase and father, Derby. He was promoted to Triple-A in 2018, but was quickly sent back to Double-A after getting confused by the home dugout being on the third base side. (Christopher Shannon)

Honestly, what he does up here is better than if he actually grabs the bat. pic.twitter.com/FVg7WnPksJ

And in 2019, Rookie made it to Yankee Stadium for the ALDS!

Last night’s Game 1 of the ALDS was so great. I loved watching all my friends on the @Yankees in action and getting the 10-4 win. I’m hoping for more of that tonight in Game 2 @yankeestadium. pic.twitter.com/QjrH0ROa3Z

Umpires probably don’t want to mess with Tech, a Belgian Malinois, who serves as the bat dog each Thursday for the Lexington Legends. (Jeff Moreland/MiLB.com)

Greensboro’s Master Yogi Berra had an accident on the field in 2009, prompting him to be ejected (yes, really) by an umpire. (Dany Keeney/MiLB.com)

Jake the Diamond Dog (the name has been passed down) has been entertaining Minor League fans for more than 20 years. (Emily Jones/MiLB.com)

Video: Jake The Diamond Dog helping out at the TinCaps game

Deuce, who replaced Dinger, was a familiar site for a decade in Myrtle Beach. He retired in 2018, and the Pelicans have since welcomed Slider.

Since 2008, Deuce has greeted fans in the Pro Shop, run the umpires fresh baseballs, and circled the bases after each Bird’s win. Tonight, after 10 years, we celebrate the best known dog in Myrtle Beach and wish this very good boy a happy retirement.

We have! Meet Slider ? pic.twitter.com/h1HowkaUBD

Titus is the spokesdog for Canines for Veterans of Charleston. He helped fetch bats on Fridays in Charleston for the RiverDogs. (Cliff Welch/ MiLB.com)

Brooks, who was originally trained as a guide dog, is the current bat dog for the Double-A Frisco RoughRiders. Clearly, he’s part of the team. (RoughRiders)

And we can’t forget Chase, another in the long line of Trenton bat dogs:

On #NationalDogDay I have to tweet my favorite picture of Chase. He was so happy to have made it to the Majors at Yankee Stadium. #BatDog pic.twitter.com/KeqpUZFMca

Danny Wild is an editor for MiLB.com. Follow his MLBlog column, Minoring in Twitter. This story was not subject to the approval of the National Association of Professional Baseball Leagues or its clubs.