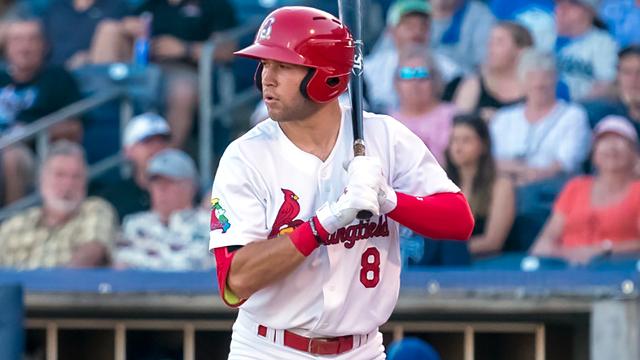 The Cardinals saw three of their Minor Leaguers ranked among MLB.com’s Top 100 prospects last weekend. Next, they will get a closer look at all three in Florida.

Carlson was that lone outfielder and will try to make an impact in his second spring as a non-roster invitee. The 21-year-old switch-hitter is coming off an impressive 2019 season in which he was MiLB.com’s MiLBY pick as the Top Breakout Prospect. He hit .292/.372/.542 over 126 games between Triple-A Memphis and Double-A Springfield, and set career highs with 26 homers and 20 stolen bases in that span. What’s more, Carlson entered 2019 with only 21 homers and 18 steals over his previous three Minor League seasons combined. He played all three outfield spots in 2019, but got the bulk of his playing time in center, where he made 94 starts.

Video: Carlson cranks one for Memphis

The 2016 first-rounder is ranked as the fifth-best outfield prospect in the game by MLB.com because of a solid collection of overall skills. His power and fielding both grade out as plus while the hit, run and arm tools have chances to be above-average. Following the departure of three outfielders this offseason (most notably Marcell Ozuna), Carlson enters camp with a legitimate chance to win a Major League spot on the grass this spring, though he’ll have to beat out several members of the 40-man roster to claim it.

This will be Gorman’s first trip to Spring Training as a non-roster invitee. The 2018 first-rounder produced a .248/.326/.439 line with 15 homers in 125 games between Class A Peoria and Class A Advanced Palm Beach in his first full season. Gorman is known primarily for his plus power while his arm tool from third base also receives above-average grades.

Liberatore, who is close friends with Gorman from their prep days in Arizona, also heads to the Major League side in his first spring with the Cards. The 20-year-old left-hander was traded from the Rays on Jan. 9 in a deal that sent Jose Martinez and Randy Arozarena to Tampa Bay. Liberatore posted a 3.10 ERA and 1.29 WHIP with 76 strikeouts in 78 1/3 innings at Class A Bowling Green in his first full season in 2019. He is MLB.com’s sixth-ranked left-handed pitching prospect, thanks to a plus fastball and curveball as well as an above-average changeup.