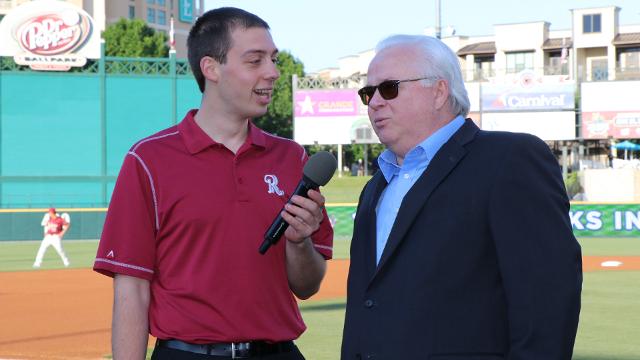 Shortly after the 2019 season, Rouillard announced he would not return to the RoughRiders after four years in the booth. Instead, he packed up his bags and moved to Fort Collins, Colorado, to pursue a career as a firefighter.

If that seems a bit out of left field, it’s because it is — Rouillard would be the first to tell you that. Firefighting was never really an aspiration for him, unlike the career he was leaving behind, but rather the product of a deeper desire to make a more tangible impact on the world. He had been wrestling with the concept for some time, but it wasn’t one he took all that seriously before years of contemplation.

“There was a night in October of 2018 where it really kind of accelerated forward,” he said. “I don’t even know what prompted the thought that night, but I was just driving home and something kicked in me that it was time to take the seedling of thought a little more seriously and let it blossom. That night, it just kind of sprung things forward.”

To understand how Rouillard got to where he is now, you need to go back a bit further than that autumn night. He fell in love with baseball as a kid growing up in Mercer Island, Washington, a small city outside Seattle. While learning the game as a player, he watched the mid-2000s Mariners teams led by Ichiro Suzuki and Felix Hernandez, who rewarded him with a lot of success through his adolescence.

But while the on-field product was captivating, the biggest connection Rouillard felt to the M’s was through Dave Niehaus, the team’s Hall-of-Fame radio broadcaster. It was through his voice that he not only grew closer to the game, but also to what became his dream job.

“That’s kind of where the inspiration began for me as a little kid,” he said. “We listened to a lot of games on the radio and his passion was super clear every time I’d listen. He just had an energy for the game and for what he was doing. And that kind of always had resonated with me.”

The dream began to materialize late in his high school tenure when he helped create a sports broadcasting program centered around the Mercer Island High School basketball team. It was refined a few hours south at the University of Oregon, where he called games for four different Ducks teams alongside a summer job in the West Coast League, a wooden bat collegiate summer circuit. It finally came to fruition when he landed a gig with the RoughRiders not long after graduating in spring 2016, first as an intern before assuming a full-time role.

By all accounts, Rouillard’s dream had been realized. The next four years produced great success on the mic and an overall unforgettable experience doing what he loved, something he definitely doesn’t take for granted.

“I got to live out a dream on a pretty high level,” he said. “It wasn’t just calling games in tiny Podunk towns, we’re talking about calling Double-A baseball in a major national market. Everything about it was a blast for me. I really enjoyed what I got to do there and I met some great people along the way.”

But as great as those years may have been, he couldn’t escape the growing feeling that he wasn’t reaching his full potential. He undoubtedly loved what he did but felt like he could be doing more to directly impact and help those around him.

“I had begun to kind of step back and evaluate things a bit more and was noticing that what I was doing really wasn’t making the kind of societal contribution that I was hoping to,” Rouillard said.

Much like his love for baseball, it was a concept instilled in him from a young age. His mother, Vicki, was a physician and taught her children the importance of helping others she gleaned from the job.

“I grew up with the mind-set of, ‘We take care of others and we take care of each other,'” Rouillard said. “That really stemmed from my mother. She, I think, had been raised the same way. … Our family was very much of the belief that we’re here for more than just ourselves on this planet and we look out for each other, and it’s important to make an impact on other people.”

Even the best chapters in life end eventually. Today, I wrap up a great career in baseball and eagerly begin a new chapter of life. In a few weeks, I’ll be moving to Fort Collins, CO to pursue a career in firefighting.

While the feeling was always there in some regard, he wasn’t going to rush into a decision as monumental as this one. He grappled with the idea for “years plural,” weighing the pros and cons of each path. It culminated that October evening when he decided he would begin to take the idea more seriously and start to explore his options if he decided to step away from the job he loved.

In those considerations came conversations with a number of people close to him. There was, of course, his mother — who he described as his “biggest cheerleader” — and there were his friends, including one whose father was a former firefighter and provided insight into what the job is like.

There also was Rebecca Force, one of his former broadcasting professors at Oregon. She made the argument that, while certainly less essential to society than firefighting, working in Minor League Baseball provided far from zero impact. His role with the RoughRiders took him all around the southern part of the country and provided substantial entertainment and community value to Frisco and northern Texas as a whole. So, really, he was indeed helping people, just in a different way.

Still, Rouillard’s inner calling persisted. Although he deeply cherished the opportunity to help present the Minor League experience, he knew it paled in comparison to the impact he could be making elsewhere.

“The big difference is that firefighting and life support services and whatnot, there’s a lot of helping people in some of their toughest times, if not the toughest day of their life,” he said. “The idea of being able to turn things in a positive direction for them and potentially save their life or stabilize them or whatever it may be, that probably really resonates with me. And I think this industry in general, the results are maybe just a little easier to see, a little more tangible, so to say.”

So while he went into the 2019 season not 100 percent sold on the decision, he kept thinking it could be his final go-round. That made it easier by the time he did decide, as it allowed him to gradually come to terms with the fact that this was the end. That’s not to say it wasn’t tough on him emotionally.

“The hardest part was the last month, once I knew it was going to happen, and going to cities for the last time and seeing certain people for the last time — that’s kind of when more of the emotional side kicked in,” he said. “It’s one thing to just kind of think about it, have these general thoughts, but then when you actually have to move on, that’s probably the hardest part and it makes it a lot more real at that point, that this part is coming to an end and it’s time to move on.”

When the RoughRiders’ season ended in September, so did Rouillard’s career in the booth. Flash forward three months and he’d moved from Frisco to Fort Collins, starting the new decade in a new city on a new pursuit. He’s in the initial stages of the process — before he can enter the fire academy in the fall, he must undergo a few months of EMT training. He said he’s enjoying it so far, although he jokingly admitted he’s not exactly delighted to be back in school.

More than anything, though, Rouillard is happy to be engaged in this new phase of his life after months of anxiously ruminating and waiting.

“It’s been nice, I’d say, to finally take some definitive steps forward too, because like I say, the timeline of decision-making there, it was a lot of waiting,” he said. “Between that night in October to the start of class, that’s 15 months of just kind of sitting there and processing. … To finally start actively learning and training has been kind of reassuring or a weight off my shoulders.”

So as the ink dries on his book’s previous chapter and he flips the page to the next one, he’s full of anticipation to see where the story will lead. And while there’s surely some nervousness, he knows it’s only natural, simply part of the writing process.

“The way I’ve looked at it throughout the whole thing, a lot of times nerves are generated through excitement, not fear,” he said. “And I think certainly there are worries or concerns, but also the fact that I’ve had certain nerves throughout this process has kind of validated for me that I’m on the right track. … It’s just another chapter in life and one that I hope will be a long one and have plenty of exciting stories along the way. Yeah, it’s all part of a new adventure and it’s only beginning over here, so I’m really excited to see where it all leads and just how much I can do with it.”

Jordan Wolf is a contributor to MiLB.com. Follow him on Twitter: @byjordanwolf. This story was not subject to the approval of the National Association of Professional Baseball Leagues or its clubs.