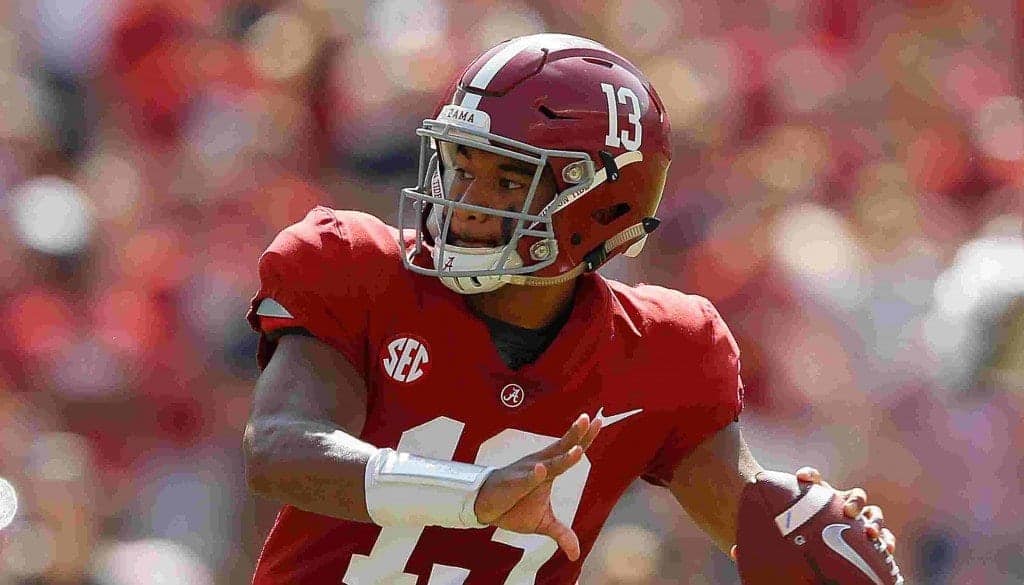 The NFL Draft will be jam packed with fascinating storylines of redemption, disappointment and countless players reaching their respective lifelong goal of becoming a professional football player at the highest level. No single story will be more compelling come NFL Draft night, and the weeks leading up to it, than the health status of Alabama Crimson Tide quarterback Tua Tagovailoa. Heading into the 2019 season, Tua was widely regarded as Heisman Trophy favorite and the consensus top pick for the 2020 NFL Draft. However, a devastating hip injury and the emergence of LSU quarterback Joe Burrow have changed that narrative dramatically. At this stage of early mock draft projection season, most analysts have Tua landing with the Miami Dolphins as the odds-on favorite for their 5th overall pick, if not sooner via a trade situation. Which leads us to the following draft props currently available on MyBookie.com:

Which QB will be selected first among the following three players:

Using the same process of elimination strategy I encourage my 5th graders to apply on standardized tests, we can pretty quickly turn this into a two horse race. There’s no telling what round Jordan Love will go in, let alone whether he cracks the top ten. While his upside is tremendous, Love is still incredibly raw and any team taking a shot at him in the top ten is applying huge risk with so much talent available at other positions in the draft. In fact, I’ve seen renderings where Love is the 6th quarterback taken behind guys like Jake Fromm and Jacob Eason. While the +500 odds are certainly enticing, Tua Tagovailoa and Justin Herbert remain firmly entrenched in the top six or seven slots according to most NFL Draft pundits. I just don’t see a scenario where Jordan Love is taken before both Tua and Herbert.

According to our own Ben Allbright, the Los Angles Chargers have Justin Herbert as a potential target early in the draft as a replacement for Philip Rivers, who appears destined to play elsewhere (Tampa anyone?) in 2020. Sitting right in front of the Chargers in the draft, are of course the Miami Dolphins, who have been linked to Tua Tagovailoa since the moment they unloaded half their roster for draft picks in September. With that in mind, the only scenario I can see where Herbert goes ahead of Tua is if there are serious medical red flags on Tagovailoa‘s dislocated hip leading up to the draft.

The +150 odds on Herbert if you feel strongly about teams passing on Tua Tagovailoa due to injury concerns might be worth it. However, I personally would think that Tua has already had some reassurances about his health and draft stock from both doctors and front office executives at this point. In fact, recent indications point towards Tua potentially throwing for teams prior to draft night. I think at -180, it’s worth the slight risk. Tua holds value as the prohibitive favorite to be taken ahead of both Herbert and Love as the second signal caller taken in among this draft class.

Will a team jump the Miami Dolphins to draft Tua?

Now whether or not Tagovailoa winds up in Miami is a different question altogether. Currently MyBookie has odds at +200 that a team will trade up past the Dolphins to acquire Tua in the NFL Draft. The wording of this specific prop is interesting because you would need a team to trade up (presumably with the Lions or Giants) and take Tua before the Dolphins are ever on the clock. Admittedly, as a pessimistic Dolphins fan myself, I might grab the +200, but I can’t in good faith recommend it as a value play.

I believe the Lions will indeed attempt to move down and acquire more picks as Matt Patricia is coaching for his job this year and can’t afford to wait on a young QB to develop. That said, they’ll be hard-pressed to find a trade partner with more ammunition than the Miami Dolphins. The idea of Stephen Ross letting the Indianapolis Colts or Oakland Raiders jump past the Dolphins to land the quarterback we all suspect Miami covets, seems far-fetched to me. The Dolphins have the most assets to make a deal and one would have to think that Patricia and Miami head coach Brian Flores have a working relationship from their time spent in New England. You could also take the “No” in this scenario at -300 but I’m not confident enough to lay that much juice. This one is a stay-away for me at this point.

Click to view the running list of our bets for this week and the 2019 NFL regular season. Be sure to bookmark that page and visit it often throughout the week to stay updated on our latest moves.

Chris Smith is Pro Football Network’s expert NFL handicapper and founder of the Free Cash Crew. You can follow him on Twitter @ChrisSmithPFN.