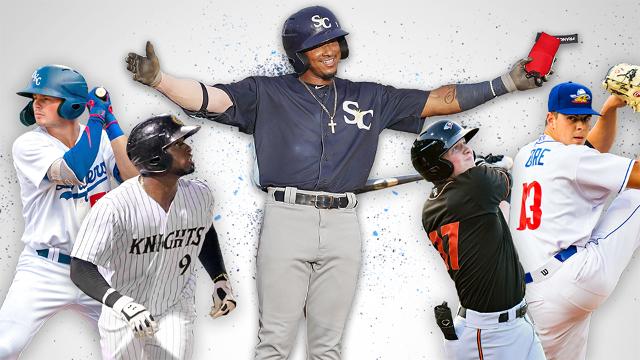 The Rays boast six players among MLB.com’s Top 100 Prospects, revealed Saturday. That’s more than any organization, with shortstop Wander Franco remaining in the No. 1 overall spot. The top prospect reached Class A Advanced Charlotte in 2019 and hit .327 with an .885 OPS during his age-18 season.

Franco, a shortstop who turns 19 on March 1, began last year with Class A Bowling Green and compiled a .318/.390/.506 slash line with 30 walks and 20 strikeouts in 233 at-bats. His production in the Florida State League after a late-June promotion wasn’t much different as he hit .339/.408/.464 with 26 walks and 15 strikeouts in 192 at-bats. Between the two levels, the native of the Dominican Republic collected nine homers, seven triples and 27 doubles.

Tampa Bay’s middle infield prospects run deeper, though. Vidal Brujan (No. 45 overall) finished 2019 with 48 stolen bases and a .735 OPS between Charlotte and Double-A Montgomery. Xavier Edwards (No. 72), acquired in December from San Diego, swiped 34 bags and posted a .771 OPS across the Class A Midwest and Class A Advanced California leagues.

At least six of the top 10 overall prospects could appear in the Majors as soon as this season.

Gavin Lux (No. 2) already has played in the postseason with the Dodgers. Third-ranked Luis Robert signed a long-term deal with the White Sox earlier this month before reaching the Majors and should be in the South Siders’ Opening Day lineup. Angels outfielder Jo Adell (No. 6) spent last August at Triple-A and caught new manager Joe Maddon’s eye before the two even met.

Go back a year and nearly a fifth of baseball’s best prospects were concentrated in two organizations. The Padres claimed 10 of the Top 100 spots and the Braves — for the second consecutive season — owned eight.

In 2020, the talent distribution has evened out a bit. Behind Tampa Bay, eight clubs have five Top 100 prospects apiece and seven teams have four. Of the four clubs with just one representative to begin last season — Boston, Kansas City, Miami, Milwaukee — only the Red Sox have stayed put. While the Brewers are the lone team without a Top 100 prospect, the Marlins have stocked up with five and the Royals boast three.

The first edition of the 2020 rankings featured nine debutants. Mets catcher Francisco Alvarez (No. 64) slotted highest among that group, already showing polish despite not turning 19 until next November. He debuted this past season after signing for $2.7 million in the summer of 2018. Between the Gulf Coast and Appalachian leagues, Alvarez batted .312 with a .916 OPS and seven homers in 157 at-bats.

The Cubs are the only club with two new names on the list. Outfielder Brennen Davis (No. 78) was limited to 50 games last season and 68 since he was a second-round pick in the 2018 Draft. Still, the 20-year-old put up a .305/.381/.479 slash line with eight homers and 30 RBIs for Class A South Bend last summer. Left-hander Brailyn Marquez (No. 68) thrived following a late-season promotion to Class A Advanced Myrtle Beach, posting a 1.71 ERA in five starts. Both were named MiLB.com Cubs Organization All-Stars.

Joe Bloss is a contributor to MiLB.com. Follow him on Twitter @jtbloss. This story was not subject to the approval of the National Association of Professional Baseball Leagues or its clubs.