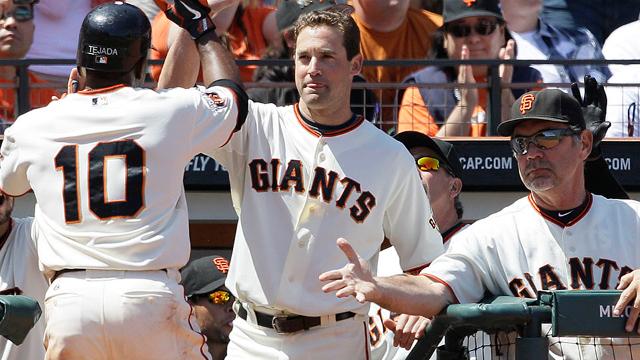 At some point — perhaps many points — during the 2020 season, Pat Burrell is going to enter a Minor League dugout and have to introduce himself. He could lead with his status as a 12-year Major Leaguer. The 292 career homers. The top-20 National League MVP finishes in 2002 and 2005. He could breeze right into his two World Series rings — one with the Phillies in 2008, the other with the Giants in 2010. He could keep it short and sweet — Pat the Bat.

Or he could even say nothing at all. After all, Burrell only retired in 2011 after playing alongside current Giants Buster Posey, Brandon Crawford and Brandon Belt. Surely, that wasn’t that long ago.

He could go with any of those intros. But he won’t.

The Giants revealed that Burrell will be taking over as Class A Advanced San Jose hitting coach for the 2020 season. The California League gig will be his first Minor League coaching job.

The former big league outfielder previously worked for the San Francisco front office under former general manager Brian Sabean as a special-assignment scout from his retirement in 2011 until the middle of 2015 before travel became too cumbersome. (“I was at the time where I really needed a break,” he said.) He stuck around northern California, got back together with his high-school girlfriend Elizabeth, got married and eventually moved back to the Majors as a pre- and postgame analyst working Giants games for NBC Sports Bay Area last season.

With his batteries recharged and his life settled, Burrell wanted to find a way to stay even more in touch with the game. He kept in contact with the new Giants regime under current president of baseball operations Farhan Zaidi, and during those discussions the open San Jose job came up. Burrell, who went to high school at Bellarmine College Preparatory in San Jose, leapt at the chance.

“There was something about wanting to coach and give back to the game that gave me everything I have,” Burrell said. “It’s funny. Somebody asked me yesterday what made me come back. I said I learned pretty much everything as a player through older players and older coaches. Having that experience around is something I really benefited from.

“Maybe sharing some of the experiences I’ve had can help some of these kids fulfill their dreams. I know that sounds a little corny, but really, there’s been so much change in baseball with how some things are going. You just don’t see a lot of those old guys hanging around that were around for me, and that was really important for me. I thought, you know what, let’s go see if I can be that guy.”

For the Giants’ part, Burrell’s experience was a big selling point.

“I would say that Pat has shown a great passion to share his knowledge to the Minor Leaguers and is also excited about learning the new information in today’s game,” San Francisco’s director of player development Kyle Haines said in an email. “He has scouting experience, as well as his former Major League playing experience to lean on as he transitions to this new role. He brings a skill set that you rarely find in a Minor League coach.”

There’s more to Burrell than just his Major League successes or scouting days.

After winning the 1998 Golden Spikes Award, the former University of Miami standout was selected first overall in that year’s Draft by the Phillies. That came with its own set of expectations, but there was a little extra weight added to those because Philadelphia had notoriously picked and were unable to sign No. 2 overall pick J.D. Drew one year earlier. The Phils couldn’t fail again with another high-profile pick, but the third baseman-turned-first baseman/left fielder moved quickly through the system. He played only 37 games at Class A Advanced (where he’ll coach this summer) in 1998, split time between Double-A and Triple-A in his first full season in 1999 and was a full-time Major Leaguer one year later, finishing fourth in the NL Rookie of the Year voting.

During that quick route to the Majors, there were periods of adjustment. Admittedly, it took Burrell a while to get used to wooden bats after thriving with aluminum ones with more life in them than the ones used in college game today. He also had been taught to hit the ball hard through the infield in college. He may have had status as a first overall pick, but he still had to win over his teammates, his organization and his new city.

“I remember watching Burrell’s first batting practice and hearing the whispers around the field,” former Phillies outfielder Doug Glanville wrote in a column for ESPN in 2012. “His swing: ‘He hits with a lot of top spin.’ His image: ‘He kind of reminds me of any good-hitting first baseman with no glove.’ He was already eroding locker room goodwill, just for taking BP. All eyes were on him.”

Burrell eventually answered a lot of those questions, hitting 82 home runs over his first three seasons in Philadelphia. He retired after 2011 with 292 career dingers, 1,393 hits and a career .253/.361/.472 slash line over 1,640 games between three organizations.

But he doesn’t forget the Minor League road that got him there, and it’s those memories he’ll put to good use this summer in San Jose. They could come most in handy with Hunter Bishop. A standout power hitter and runner at Arizona State, Bishop was taken 10th overall in last year’s Draft by the Giants and seems likely ticketed to join Burrell in San Jose, where 2018 first-rounder Joey Bart opened his first full season.

If Bishop does land in the Cal League, he will not have trouble finding Burrell for guidance.

“I’ll tell you, there’s a lot of pressure on high picks,” the 45-year-old coach said. “I was certainly one. You’re also going to be on a team with guys from all walks of life. How do we maximize all of our goals with the team? When I go back to A ball, the Major Leagues seem so far away. Then you get to Double-A, and it seems a little closer but you’re not really sure. Your goal is to find out where you fit into this whole picture and plan. I think it’s very helpful to have people to support around you and to help you figure that stuff out.”

While Burrell’s individual story could be useful to some, he admits it won’t be for all. In other words, don’t expect there to be a broad-brush Pat Burrell School of Hitting in the San Jose clubhouse.

“No. God, no,” he said. “Most importantly, everybody’s different. What I care about is, ‘Are we making improvements? Are we getting the job done?’ However you can do it, great. My job here now is to learn all the new and different ways people are going about it, and there is a lot of information, which is fantastic. We learned by the results coming off the bat in BP back when I played. We didn’t have all the videos, launch angles, spin rates, staying on plane. It’s phenomenal stuff. I’m getting started with it, so I have a lot to learn. But everything seems to make a lot of sense.

“It’s amazing when you look back. As an industry, I think my generation thought we knew a lot about the swing. Man, I’ve been shocked at how little I did know. It’s been humbling. I can’t count how many times I’ve said, ‘God, I wish I had known some of this stuff.'”

At this point, Burrell admits he’s still in the learning stages of how he can marry his experience with the new information he’s taking in. He participated in a two-day seminar in Arizona with OnBase University about the mechanics of hitting and how to use functional movement screens to determine the best individual plans for batters. He has spent time at the Giants complex for January instructs, getting to know at least a few of his future players. Mostly, he’s trying to become someone players can recognize, seek out and ask specific, modern questions of as they attempt to build their own World Series-winning careers.

No more Pat the Bat. Pat the hitting coach will do just fine.

“The truth is there are guys here who were born the same year I was drafted,” Burrell said. “Some of these guys are 20, 21, 22 years old. A lot of them are. I don’t know how much they know. That’s not important to me. What’s important to me is if I can get through. That’s all that matters.”