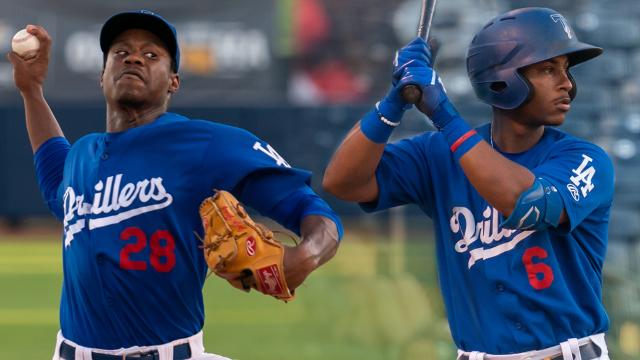 Gray days are coming to Arizona, and fans should be thrilled.

The Dodgers announced No. 4 prospect Josiah Gray and No. 5 prospect Jeter Downs are two of 21 non-roster invitees to big league camp at Camelback Ranch.

Gray is coming off a strong first season in the Los Angeles system. MLB.com’s No. 75 overall prospect went 11-2 with a 2.28 ERA, 147 strikeouts and 31 walks in 130 innings with Class A Great Lakes, Class A Advanced Rancho Cucamonga and Double-A Tulsa.

Gray was selected by the Reds in the supplemental second round of the 2018 Draft out of Le Moyne College before being dealt to the Dodgers in the Yasiel Puig trade that December. The 22-year-old right-hander features a plus-fastball as part of a four-pitch mix. Just behind Dustin May, who made his Major League debut in 2019, Gray is one of Los Angeles’ most exciting pitching prospects entering big league camp.

Downs arrived in the same trade and has also made himself at home in the new system. In his second full season, the No. 87 overall prospect hit .276/.362/.526 with 24 homers and 86 RBIs — all career highs — for Rancho Cucamonga and Tulsa. Downs capped his 2019 campaign by drilling three homers in Game 2 of the Texas League Finals.

Like his namesake, the 21-year-old has spent most of his career at shortstop, though he also sees time at second, given his arm, which earns a 55 grade on the 20-80 scale.

The Spring Training pitching staff will also include right-handers Edwin Uceta (No. 21 prospect), Jordan Sheffield (No. 26) and Marshall Kasowski (No. 27).