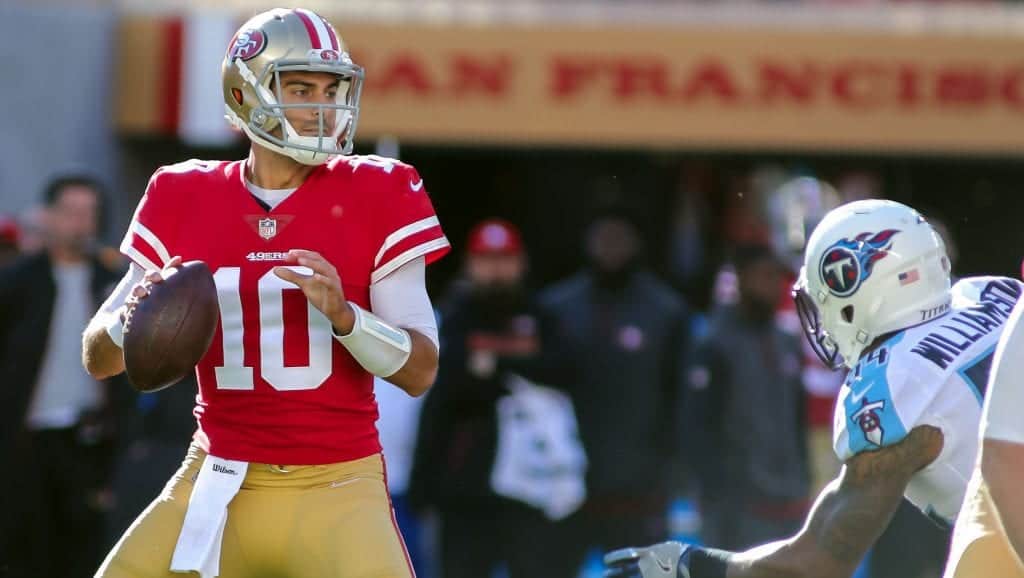 San Francisco 49ers quarterback Jimmy Garoppolo is no stranger to big games. As Tom Brady’s backup he won two Super Bowls with the New England Patriots. It doesn’t get much bigger than that. Except that it does. Today, Garoppolo will lead the 49ers into the NFC Championship Game against the Green Bay Packers with a place in Super Bowl LIV on the line.

How a player performs in these big games can ultimately define their claim to greatness. You can hold all the touchdown pass records, or have the best pass completion percentage record in the NFL, but if you can’t get it done when it matters, if you choke in the big games, then you will never truly be considered great.

There’s no denying that the San Francisco 49ers have been great this season.

Much of their success has been attributed to the ground game. It’s a fair assumption given that they are second in the NFL in rushing yards (2,305) and they lead the league in rushing touchdowns (23). Tevin Coleman and Raheem Mostert are having career years.

However, it’s the performance of quarterback Jimmy Garoppolo in big games that has been a difference maker. When the game is on the line, when it matters, Garoppolo has led this team to success.

Jimmy Garoppolo at his best in big games

We’ve been using Pro Football Network’s Offensive Share Metric (OSM) alongside NFL Next Gen Stats all season to give you a deeper analysis of a player’s individual performance. Using the same tools, allow me to show you Jimmy Garoppolo’s impact in big games.

For the NFL 2019 regular season, Garoppolo was the 15th-ranked quarterback overall with a grade of 23.9. For those unfamiliar with the OSM grade scale, that equates to a good performance.

Garoppolo’s had some distinctly average to downright poor performances in the season. The opening game of the year against the Tampa Bay Buccaneers earned him an average grade of 12.87. Despite the 49ers winning 31-17, the defense accounted for 14 points and Robbie Gould kicked three field goals to account for nine more.

In the defeats to the Seattle Seahawks (Week 10) and the Atlanta Falcons (Week 15), Garoppolo received OSM grades of 8.06 and 7.95 respectively. These grades signify a performance detrimental to the offensive production of the team. The game against Atlanta was particularly bad, with a completion percentage 6% below expectation and a league-low air yards to the sticks. Garoppolo was throwing some 4.7 yards behind the marker, relying on playmakers like George Kittle to make yards after the catch.

However, Garoppolo’s best games have come in the biggest spots. When the San Francisco 49ers need a win, when the outcome of the game has been crucial to their destiny, quarterback Jimmy Garoppolo has had big games.

Take the Week 14 game against the New Orleans Saints in the Mercedes Benz Superdome for example. A win in that game was crucial to the 49ers chances of gaining the #1 seed and securing home passage through the NFL Playoffs. Garoppolo went blow-for-blow with Drew Brees, completing 74 percent of his passes for 349 yards and four touchdowns. His OSM grade for the game was 34.59, way above his overall grade for the season.

Everything Garoppolo did in that game was above his season average. His completion percentage above expectation was +11.8%. He completed more air yards than he’d intended and his 131.7 passer rating led the league.

If Garoppolo hadn’t connected with Deebo Samuel on fourth and two at the San Francisco 33-yard line late in the fourth quarter, then they never would have had the opportunity to kick the game-winning field goal. Garoppolo has more fourth quarter comebacks than any other quarterback in the league.

It was the same again in the Week 17 game in Seattle. Going up against Russell Wilson and the Seahawks with the #1 seed very much on the line, Jimmy Garoppolo showed he could lead his team in big games.

The box score will read that Raheem Mostert’s two rushing touchdowns were the difference maker in that 49ers win. However, big plays to both Kittle and Samuel from Garoppolo helped set up those touchdown runs. As in the win against the Saints, Garoppolo’s completion percentage above expectation and his ability to complete his intended air yards were difference makers. His performance received an OSM grade of 30.94.

In last weekend’s Divisional Round of the NFL Playoffs, Garoppolo was the highest-graded quarterback with an OSM grade of 30.16, as the 49ers beat the Minnesota Vikings to set up today’s clash with Aaron Rodgers and the Green Bay Packers. Although a combination of defense and a dominant ground game secured the victory, it was Garoppolo’s opening drive touchdown that set up the 49ers for success.

OSM provides the winning formula for beating the Packers

It’s that same recipe for success that will be the key to defeating the Packers and booking a place in the Super Bowl.

In the three defeats the Packers have suffered in the 2019 regular season, the opposing quarterback has received an OSM grade above his average for the season.

Carson Wentz received a 22.33 grade as the Eagles won in Green Bay on Thursday Night Football. They also had a strong running back tandem with Jordan Howard and Miles Sanders. The Eagles also had a dominant performance out of tight end Zach Ertz, who received an OSM grade of 39.18.

In the Week 9 defeat to the Los Angeles Chargers, the Packers allowed Philip Rivers an OSM grade of 33.13, well above his season average, whilst struggling to contain the running back duo of Austin Ekeler and Melvin Gordon. Once again, a tight end had a 30-plus OSM score, this time with Hunter Henry.

The NFC Championship Game will be a rematch of the Packers third and final defeat of the regular season.

The Week 12 clash between Green Bay and the 49ers on Sunday Night Football was an embarrassment that the Packers will want to avenge. Although Tevin Coleman opened the scoring and finished off the game with a touchdown run, it was Garoppolo’s connection with George Kittle that dominated the game for the 49ers. Garoppolo had an OSM grade above his season average and Kittle received an elite grade of 54.86.

Jimmy Garoppolo has guided the 49ers to wins on Sunday Night Football and Monday Night Football. He’s led them to victory in the Superdome and at Century Link Field this season. Under his guidance, they’ve won in the NFL Playoffs for the first time since 2013.

All of those are big games. Tonight will see the biggest game of his career. Luckily for the 49ers, he thrives on those big games.

Jimmy “Big Game” Garoppolo has a nice ring to it.