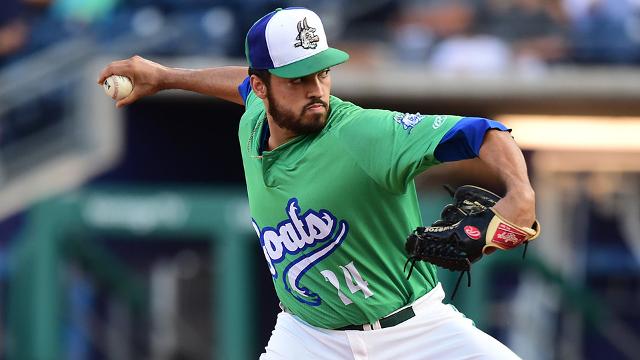 Rockies No. 18 prospect Justin Lawrence has been suspended 80 games after testing positive for a banned performance enhancer, Major League Baseball announced Friday. The suspension will begin at the outset of the 2020 season.

Lawrence tested positive for Dehydrochlormethyltestosterone, or DHCMT. That compound is typically linked to the oral steroid Turinabol. It is banned under the Major League Baseball’s Joint Drug Prevention and Treatment Program, and Lawrence’s punishment falls under that program because of his place on Colorado’s 40-man roster.

“The Colorado Rockies are disappointed to announce that right-handed pitcher Justin Lawrence has violated the terms of Major League Baseball’s Drug Prevention and Treatment Program, resulting in his 80-game suspension,” the Rockies said in a statement. “The Rockies organization fully supports MLB’s Drug Prevention and Treatment Program, and we believe that Justin will learn from this experience.”

The 25-year-old right-hander posted an 8.76 ERA with 32 strikeouts and 29 walks over 37 innings (all in relief) between Double-A Hartford and Triple-A Albuquerque in 2019. It was a difficult season for a pitcher who had finished with a 2.65 ERA over 55 appearances for Class A Advanced Lancaster in the hitter-friendly California League the season before. He was added to the Rockies’ 40-man roster in November 2018.

Born in Panama, Lawrence was a 12th-round pick out of a Florida junior college in 2015. He has pitched exclusively out of the bullpen during his five Minor League seasons. He earns plus-plus grades for his upper-90s fastball, which has touched triple digits at times, and features a sidearm delivery. However, his control is inconsistent, and his slider and changeup are considered average offerings at best.

The Rockies farmhand is the first Minor Leaguer to receive a drug-related suspension in 2020. Fifty-one players were suspended in 2019 for drug-related violations. That number could drop this year with natural cannabinoids (including marijuana) being removed from the list of banned drugs of abuse.