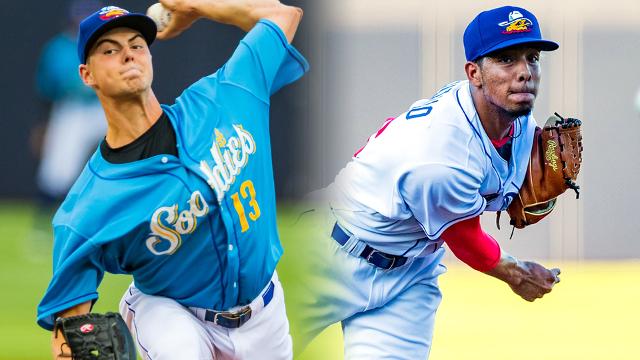 The Padres might want to pack some sunglasses for Arizona because they’re about to get a closer look at a bright future.

Gore was recently named MLB.com’s top left-handed pitching prospect and is coming off a stellar 2019 campaign in which he won a MiLBY for Top Starting Pitcher. The 2017 third overall pick finished with a 1.69 ERA, 0.83 WHIP, 135 strikeouts and 28 walks over 101 innings with Class A Advanced Lake Elsinore and Double-A Amarillo. Beyond the numbers, Gore’s workload was promising after being limited to 60 2/3 frames in 2018 due to blister issues.

At his best, the 20-year-old southpaw possesses four plus pitches in his mid-90s fastball, curveball, slider and changeup, and the whole package plays up because of his impressive ability to throw strikes. Given his talent, level of dominance and where he ended last season, it’s possible Gore could reach the Majors in 2020. A strong spring could push that timeline even further forward. Notably, the Padres allowed Fernando Tatis Jr. and Chris Paddack to skip over Triple-A and open 2019 in the Majors after spending the spring as non-roster invitees.

Patiño checked in at No. 8 on MLB.com’s recent ranking of right-handed pitching prospects. The Colombia native had a 2.57 ERA and 1.13 WHIP with 123 strikeouts in 94 2/3 innings between Lake Elsinore and Amarillo last season. His arsenal includes a plus-plus fastball that can touch the high 90s and a plus slider. Like Gore, he possesses impressive control for someone of his age and relative inexperience. He, too, could push his way into the San Diego rotation discussion, though he has yet to top 100 frames in a Minor League season.

Trammell came over to the Padres in the three-team deadline deal that sent Yasiel Puig to the Indians and Trevor Bauer to the Reds. He finished 2019 as MLB.com’s No. 28 overall prospect, but his stock slipped after a rough offensive year that saw him hit .234/.340/.349 with 10 homers and 20 stolen bases over 126 games between two Double-A affiliates. He did heat up in Amarillo’s run to a Texas League title, hitting the Finals-winning grand slam in Game 5 against Tulsa and producing a .310/.356/.643 line over 10 games. The top San Diego position-player prospect is best known for his plus-plus speed and impressive defense. He has split his time between left and center in the Minors but played exclusively up the middle in the San Diego system following the July 31 trade.

Campusano was a breakout star in the Padres pipeline in 2019, finishing at No. 86 overall — his first time factoring into the Top 100. The 21-year-old backstop hit .325/.396/.509 with 15 homers, 57 strikeouts and 52 walks in 110 games, all with Lake Elsinore. A second-round pick out of a Georgia high school in 2017, Campusano entered last season with only seven homers on his Minor League resume. Beyond his above-average offensive potential, he also receives plus grades for his arm behind the plate. The whole package led MLB.com to slot Campusano into the fourth spot in its recent catcher prospect rankings.