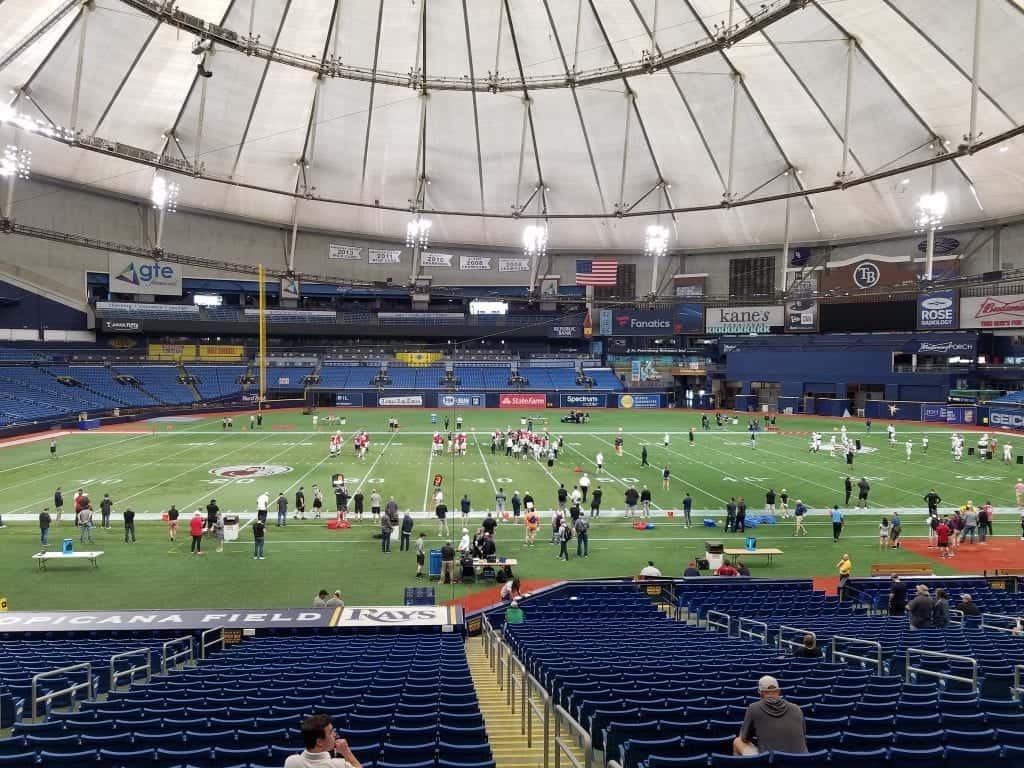 The East-West Shrine Game is on Saturday. But the festivities got underway yesterday with day one of practice. Day two of Shrine Game practice will begin in moments. The East squad will take the field at 9:20 am ET. The West team will follow this afternoon, with a scheduled start time of 2:40 pm ET.

On day one for the East, quarterback James Morgan and wide receiver Mason Kinsey were among the standouts. For the West, running back James Robinson was the best back on either squad yesterday. Additionally, several West offensive linemen had strong performances.

And if you want to catch up on the full Shrine Game rosters, you can find them here.

9:15 AM ET: Practice is set to begin here at Tropicana Field shortly.

9:50 AM ET: Opening drills between QBs & WRs with no DBs. Princeton’s Kevin Davidson has a big-league arm. Delivers all his throws with terrific velocity.

9:55 AM ET: WR Mason Kinsey runs outstanding routes. He is quick, sinks his hips, and is always on balance. He has a great WR technique.

10:00 AM ET: Yesterday, I mentioned Michael Pinckney‘s struggles in coverage. He’s rebounded today in drills and looks good. I’m told Pinckney is also dealing with a hip injury that must eventually be fixed.

10:05 AM ET: SMU safety Rodney Clemons is again making a lot of next-level plays in coverage.

10:10 AM ET: UCF running back Adrian Killins is displaying killer quickness and footwork. He has defenders grasping at air.

10:15 AM ET: CB Lavert Hill was reduced to almost making an open-field tackle in order to stop Kinsey out of his route.

10:30 AM ET: Murphy is having the best practice of any blocker from the East today.

10:40 AM ET: Temple’s Isaiah Wright is having a strong day. He has made a lot of nice catches.

10:50 AM ET: Florida’s Josh Hammond is another receiver having a strong practice. He shows a real nice burst off the line and has made several nice grabs today.