ORCHARD PARK, N.Y. — The level of uncertainty surrounding the Buffalo Bills following their AFC wild-card loss to the Houston Texans is nowhere near as palpable as it was after a 2018 season in which they finished 6-10.

Bills general manager Brandon Beane and coach Sean McDermott know they have a playoff-caliber roster. They know their four-year plan for rebuilding a middling franchise is very much on track and they know they have the draft capital and salary-cap wiggle room to make the necessary tweaks to a team that went 10-6 in 2019.

Monday through Friday, host Mina Kimes brings you an inside look at the most interesting stories at ESPN, as told by the top reporters and insiders on the planet. Listen

“We don’t win 10 games without Josh Allen, first off. He did a lot of great things,” Beane said at his end-of-season news conference Tuesday. “Was everything perfect? No. It’s a quarterback league, if you do have elite quarterback play, definitely ups your odds.

“I don’t want to sit here and say you can’t win a Super Bowl without an elite quarterback — there have been some cases. But generally speaking, most of the teams that advance in the playoffs year after year, and the teams that are steady [at] winning their division have good quarterback play.”

Buffalo has a realistic shot at becoming one of those teams, starting in 2020. Perennial AFC East champion New England Patriots might be without Tom Brady for the first time in nearly two decades and the New York Jets and Miami Dolphins are still looking to get their rebuilds off the ground. After challenging for the division title in 2019, the Bills could reasonably do so again if they’re able to keep most of their roster intact, as both Beane and McDermott want.

But without another step forward from Allen, 10-6 with a first-round exit is closer to the team’s ceiling than its floor; as McDermott outlined, there are a few things the second-year quarterback can do this offseason to take that step. 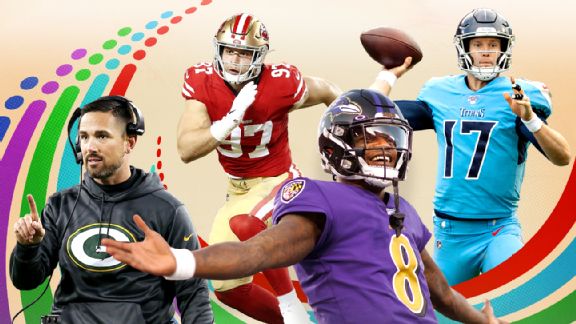 “I think No. 1 is let’s start with rest,” he said. “And then I know [Allen’s] going to do this, start working on his body first, getting his body healthy, getting his body ready to go as far as strength … Then working with [quarterback guru Jordan Palmer] in this case and making sure he’s working on techniques. Obviously the deep ball has been a conversation, so he’s very aware of that, his feet.

“There’s plenty for Josh to work on. … That’s the greatest part about Josh is he’s aware of it and he’s self-critical.”

After an inefficient rookie season in 2018, Allen improved in nearly every passing statistical category — although his accuracy and decision-making still leave much to be desired at times.

Beane and McDermott agreed that some of his more head-scratching decisions — most recently, his jump-ball 40 yards downfield to double-covered fullback Pat DiMarco, and a nearly disastrous no-look lateral to Dawson Knox against Houston — stem from his propensity to do “too much.” It was an issue that arose often in 2018 but only came out in spurts down the stretch in 2019.

Beane said Allen’s self-awareness and desire to be coached have helped strengthen the team’s confidence in its 23-year-old quarterback. Beane also admitted to putting Allen in a no-win situation in 2018, and vowed to continue to add talent around him this offseason — although he said fans shouldn’t expect Buffalo to spend a chunk of its projected $88 million in salary-cap space on a big-name offensive playmaker.

The Bills would prefer to spend that money on their own drafted and developed players — and are saving a sizable portion of it for Allen’s next contract, if he continues to earn it. The way Beane speaks of Allen’s development, it’s something Buffalo fully expects to come to fruition.

“I don’t think that there’s a hump that Josh can’t get over,” Beane said. “He wants the feedback. He doesn’t get his feelings hurt. He knows every question you guys are asking about him, he knows. He’s very in tune. I think at the end of the day, it’s maturity. Again, it’s me doing a better job of increasing the talent around him, too … where he’s just got to get the ball out, hand it off, do whatever and not feel like he’s got to do too much.

“I have not even a doubt he’ll learn from it. I’m as convinced today as ever that Josh will be a better version of himself next year.”