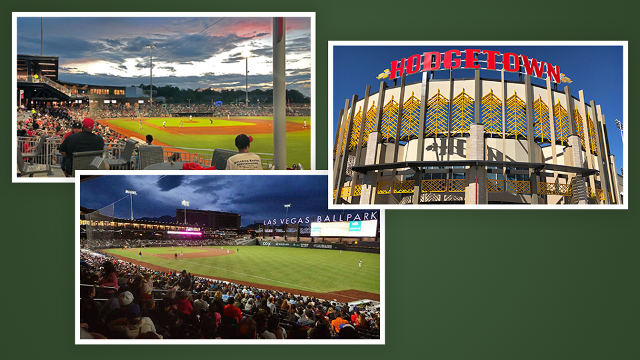 ONEOK Field (Tulsa Drillers, Texas League) — After playing at aptly named Drillers Park from 1981-2009, the Drillers relocated to ONEOK Park in Tulsa’s Greenwood neighborhood. Greenwood, once one of the most affluent black communities in the United States, was destroyed in 1921 during a devastating race riot. ONEOK Field is located across the street from John Hope Reconciliation Park, which explores the legacies of the riots. I visited in 2012 during the team’s Juneteenth celebration.

PK Park (Eugene Emeralds, Northwest League) — The Emeralds were founded in 1955 as a charter member of the Northwest League. For most of their existence (1969-2009), they played at Civic Stadium. That facility, a true throwback, opened in 1938 and was destroyed by a fire in 2015. PK Park, which opened in 2009, also is the home of the University of Oregon’s baseball team. The short-season Emeralds became the facility’s summertime tenants in 2010, setting up shop once the collegiate campaign is complete. I visited in 2012, on an evening in which the team gave away bobbleheads honoring University of Oregon track star Steve Prefontaine.

Werner Park (Omaha Storm Chasers, Pacific Coast League) — In 2010, I concluded my ballpark travels by attending the last-ever Omaha Royals game at Rosenblatt Stadium. Heading into 2011, the Royals rebranded as the Storm Chasers and moved into Werner Park in nearby Papillion, Nebraska. In 2015, when I visited, the team’s concession offerings included the deep-fried delight that is the Frenchee.

Ron Tonkin Field (Hillsboro Hops, Northwest League) — The Hillsboro Hops marked the return of Minor League Baseball to the Portland (Oregon) area, following the 2011 departure of the Pacific Coast League’s Portland Beavers. The Hops were previously based out of Yakima (Washington) County Stadium, where they were known as the Bears. I concluded my 2013 travels with a stop at Ron Tonkin Field, where I witnessed the first rain delay in the history of the franchise.

BB&T Ballpark (Charlotte Knights, International League) — After spending more than two decades playing across the state line in Fort Mill, South Carolina, the Knights moved from Knights Stadium and into a new downtown facility with a stunning view of the Charlotte skyline. BB&T Ballpark, the second stadium with that name to open in North Carolina [following Winston-Salem], was the only International League facility to debut this decade. I stopped by in July, on an evening when members of the Carolina Panthers took batting practice.

Southwest University Field (El Paso Chihuahuas, Pacific Coast League) — The Portland Beavers relocated to Tucson following the 2011 season, spending three years as the Tucson Padres and operating out of Kino Stadium [a former Spring Training facility]. The franchise then moved to a more permanent home in the form of Southwest University Park. It’s my favorite ballpark in all of Triple-A,featuring views of both the Franklin Mountains and Juárez, Mexico.

First Tennessee Park (Nashville Sounds, Pacific Coast League) — After spending the better part of four decades at Greer Stadium, the Nashville Sounds unveiled a new set of logos, aligned with a new affiliate — the Oakland A’s — and headed over to their new downtown home of First Tennessee Park. It was the second PCL ballpark to open in as many years and one of four this decade. I was in town for the team’s first rainout at its new home; still, much hot chicken was consumed.

MGM Park (Biloxi Shuckers, Southern League) — In 2020, baseball is returning to the Huntsville area in the form of the Rocket City Trash Pandas. That city had previously hosted the Huntsville Stars, who relocated from Joe Davis Stadium to Biloxi’s MGM Park and became the Shuckers. MGM Park sits in the shadow of the hulking Beau Rivage, an MGM-owned resort and casino. I stopped by at the end of July, sharing first-pitch duties with Bello the clown.

Segra Park (Columbia Fireflies, South Atlantic League) — After playing their final season at Grayson Stadium in 2015, the Savannah Sand Gnats relocated to Segra Park [initially called Spirit Communications Park] and became the Fireflies. The facility, part of a larger development project, is located on the grounds of a former mental hospital. I visited the Fireflies in each of their first two seasons. That latter stop was to witness a ballgame with a built-in eclipse delay.

Dunkin’ Donuts Park (Hartford Yard Goats, Eastern League) — Dunkin’ Donuts Park was originally slated to open in 2016, but construction delays forced the team to spend the entire season on the road. The ballpark debuted instead in 2017 and, as I found out,it was worth the wait. The Yard Goats had previously existed as the New Britain Rock Cats, who competed out of New Britain Stadium.

SRP Park (Augusta GreenJackets, South Atlantic League) — In 2018, the Augusta GreenJackets crossed state lines [and a river], relocating from Lake Olmstead Stadium in Augusta, Georgia, to SRP Park in North Augusta, South Carolina. Their new digs, the centerpiece of the Riverside Village development project, is accessible via golf cart from the parking garages. It’s a fitting form of transportation, given the Masters-related origin of the GreenJackets’ name. I made the drive there in late July.

Las Vegas Ballpark (Las Vegas Aviators, Pacific Coast League) — Las Vegas’ professional baseball team went through major changes prior to 2019. The long-running PCL entity changed its name [from 51s to Aviators], affiliation [from the New York Mets to the A’s] and, of course, ballpark. Its previous home of Cashman Field was located in close proximity to “old” downtown Las Vegas. Las Vegas Ballpark is in the planned community of Summerlin, owned by the same entity — the Howard Hughes Corporation — that owns the team. When I visited, I found it to be one of the sleekest and most luxurious stadiums in the Minors.

HODGETOWN (Amarillo Sod Poodles, Texas League) — The Amarillo Sod Poodles came into existence via an interconnected series of maneuvers that involved Helena, Montana; Colorado Springs; and San Antonio. The team, the first affiliated entity to play in the Texas panhandle city since the 1982 Gold Sox, calls (all-caps) HODGETOWN home. I made the pilgrimage to Amarillo in June, discovering that, in HODGETOWN, the fans are enthusiastic and the sweet tea plentiful.

Segra Stadium (Fayetteville Woodpeckers, Carolina League) — The Woodpeckers were preceded by the Buies Creek Astros, who played two seasons at Campbell University’s Jim Perry Field. In 2019, the Class A Advanced Houston affiliate moved to its permanent home in Fayetteville. Segra Stadium, a snug downtown facility bordered on two sides by train tracks, marked the return of Minor League Baseball to Fayetteville after an 18-year absence. Get the Philly Cheesesteak Nachos, you won’t regret it.