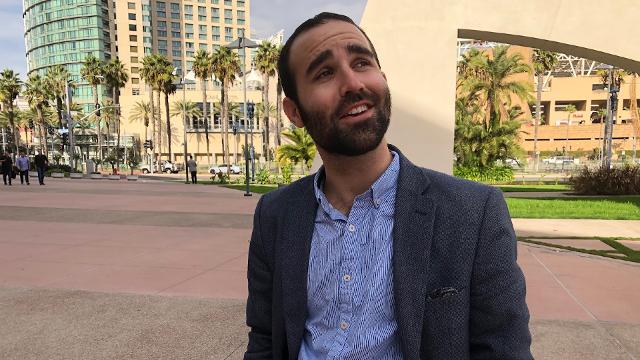 SAN DIEGO — When the Johnson City Cardinals won the Appalachian League championship in September, broadcaster Joey Zanaboni was on the call.

“And they pour out of the dugout!” yelled Zanaboni, as celebratory Cardinals players ran toward the pitcher’s mound. “Shave me! Shave my body hair like a domesticated sea bass! Give me a pair of sewing scissors and a half a bottle of dish soap, let me go to town, baby!”

Whether you love him, hate him or (most likely) have never heard of him, it’s safe to say this much: there’s no one quite like Joey Zanaboni.

Thus concludes the weirdest, funniest, strangest, craziest, most beautiful odyssey in all of @MiLB broadcasting in 2019. I vowed to dedicated my baseball work this year to #TheLiving. Mission accomplished. #LCRR #SoundOn? pic.twitter.com/F3IB3QC2GZ

Zanaboni is looking for his next baseball broadcasting gig, a quest that brought him to this week’s Baseball Winter Meetings in San Diego. His job search is motivated, in part, by the need for a steady paycheck. But Zanaboni speaks of his career in terms that exceed the quotidian and sometimes border on the mystical. The 28-year-old St. Louis native positions himself at the vanguard of a self-instigated revolution, one that is neatly summed up via the pinned tweet on his Twitter profile:

I want to be the first real millennial sports announcer who reflects the endless optimism, relentless anxiety and glorious randomness of this generation.

We were raised on iPhones and smart toilets and Family Guy. Mine is not a toast to the world as it was, but as it is. #LCRR pic.twitter.com/Y5fZGUrd4l

And what is #LCRR? Asked this question, Zanaboni emits a sharp, giddy laugh before proceeding.

“LCRR, of course, means freedom. LCRR is the promise of new horizons. Lock it, Cock it, Rock it and Restock it, baby — LCRR,” he said. It just means that this generation was raised in a different way. We’ve been raised by things that are supposed make us laugh even when they’re not supposed to make us laugh. And people who are millennials? They’re random, yeah, because they were raised by things on the internet.”

This “glorious randomness” is a hallmark of Zanaboni’s broadcasts, as the aforementioned “Shave me like a fish” championship call demonstrates. He often punctuates his calls with absurdist word play and bizarre non-sequiturs, with an emphasis on similes and metaphor in which a play on the baseball diamond is equated to something that is most decidedly not. A few examples, of many:

Either somebody dropped some paint chips into my Metamucil powder and I’m seeing double, or the Cardinals just turned two.

I haven’t seen anything on fire like this since we decided to get rid of the living room couch. Boy that Walgreens parking lot got a little wild that night.”

Crushing it like that exhausted mall store Santa accidentally rolling over on the cat he’s been dressing as a miniature reindeer.

So who is Joey Zanaboni and how did he get this way? He said that, in essence, he is a modern-day Geoffrey Chaucer. So long as the Chaucer in question is the one portrayed by Paul Bettany in the 2001 film A Knight’s Tale.

“[Chaucer] represents the best of the troubadour poet, people bouncing around, learning different stories, lionizing certain people, getting involved in drama, recording it and trying to make something beautiful out of the words,” Zanaboni said. “He’s a storyteller, but really he’s a poet, and in his own time, the movie suggests, he’s pilloried to the point he has to call himself Lillium Inter Spinas — the Lily Among the Thorns.”

As this self-chosen appellation makes clear, Zanaboni embraces his distinctly anomalous status within the broadcasting industry. He said that what he’s doing is not just sports broadcasting, it’s an “experiment in language” in line with the poetry chapbooks he writes but seldom shares.

“I think a lot of it is sort of the same thing,” he said of the relationship between poetry and broadcasting. “I’m fascinated by language and see what I am doing as a sports announcing for the internet age. … I have immense appreciation for Jack Buck, Vin Scully, Red Barber and people who came before. But find me Red Barber’s Snapchat account. Find me Vin Scully’s Instagram. I’m trying to do things that stand out in the modern world.”

Barber, Buck and Scully have influenced generations of broadcasters, but Zanaboni said one of his biggest influences comes from outside the baseball world.

“A hero of mine would be Kay Ryan, who was the poet laureate from 2008 until 2010,” he said. “She had these puns, but they’re more than puns in her poems, she gives her poetry such depth because of this mysterious sort of meaning. And one of the things she taught about was recombinant rhyme. There’d be a sound at the end of the sentence and maybe there’d be that sound in the middle of the next sentence. Like recombinant DNA, it’s sort of reforming itself. So I like to think of what I do as sort of recombinant poetry. The same themes come up.

“Baseball is full of clichés, you know: blasted, crushing it, cracking it, this guy’s hotter than, whatever. So what I see myself doing is taking these sort of sunken clichés that we’ve become inured to and taking them apart and then re-welding them back together to make something fresh.”

Zanaboni’s style is sure to alienate purists, but it will result in attention. And isn’t that the point?

“My videos have garnered over a million views in the last nine months, so if the philosophical underpinning doesn’t do anything for you, then take a look at the statistics,” he said. “This is dying to be profitized, this is dying to be sponsored, this is dying to become part of something larger in order to expand their brands. …The game has oriented itself toward sabermetrics analysis and statistics. We have numbers for everything. But it feels at times that the spirit of silliness is gone from the game. Movies like Major League and television shows like Brockmire show that there’s a niche for sports announcing infused with a certain cheerful joy and maybe a skewed look at the world. People are hopeful for something like that in real life. I just think I have what it takes to fill that hole in the market.”

To do this, Zanaboni acknowledges that “persistence his key.” He’s shown persistence in his career, which began in 2014 when he was hired to do play-by-play for the Derby Twins of the summer collegiate Jayhawk League. He’s also logged time with several independent league teams and has called a variety of sports on the collegiate level [with a recent emphasis on women’s soccer]. Zanaboni’s most meaningful professional experience, however, were the three academic years he spent as the lead broadcaster for Coahoma College’s athletic program.

“It’s one of the only historically black junior colleges in America,” Zanaboni said. “I was 23 when I started and was about 26 when I left. And if there was a singular experience that I had, it was living and working in the Mississippi Delta during that time. To learn about a place in the country that’s often forgotten and yet is actually the cornerstone for much of what we think … America was boiled down to its component parts.

“And when I went down there, I had an English degree and I had a certain way of thinking about the world. I had very limited experience, though. And one of the things I noticed right off the bat was that my language was not as creative as the people I worked with, who had just a variety of roles around the school. They had language that was infused with creativity. It wasn’t worried about rules. It wasn’t worried about sounding academic. It was never worried about sounding stuffy. It was real.”

Zanaboni’s first experience in Minor League Baseball didn’t go as well. He was hired by the Pioneer League’s Orem Owlz in 2015 but quit after one game due to a conflict over a proposed — but ultimately cancelled — theme night that did not align with his values. Four years and many gigs later, his 2019 return to the Minors via the Johnson City Cardinals was a success. His current focus is calling woman’s collegiate soccer and, of course, landing his next job in baseball.

Will you heed his call? pic.twitter.com/ttgp2aLNpI

But is baseball ready to truly embrace the self-proclaimed “first real millennial?”

“Baseball needs to get younger,” Zanaboni said. “To quote ‘Mad Men,’ old men love building golden tombs and sealing us in with them. … People are asked to judge quality and often they seek out what imitates things that have come before. Mine is an experiment in trying to do something different. Some of it sticks, some of it is improving and some of it is great already. But I just see myself on the first step of a journey, and I see myself as part of the new wave.”