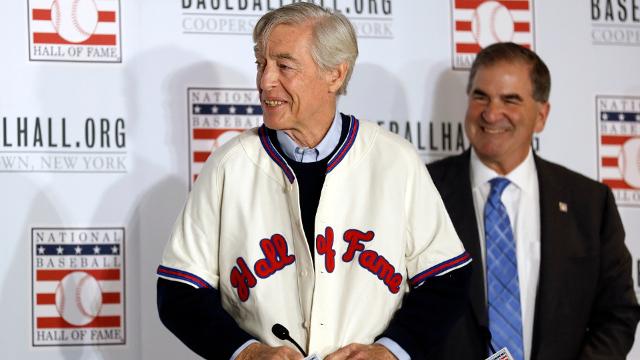 SAN DIEGO — Ted Simmons learned a lesson pretty quickly at the start of his professional baseball career. It’s a lesson prospects such as Wander Franco, Luis Robert and another switch-handed catcher in Adley Rutschman pick up to this day.

In the Minor Leagues, have bat, will travel. Simmons’ next stop: Cooperstown.

Simmons will join the Baseball Hall of Fame’s Class of 2020 after being voted in by the 16-member Modern Era Committee along with former Major League Baseball Players Association executive director Marvin Miller on Sunday. While much of the focus on Simmons’ induction has been on the 25-year wait between the time of his first eligibility in 1994 and his selection over the weekend, his ascent to the Major Leagues was quite the opposite experience.

The Cardinals grabbed their catcher of the future with the 10th overall pick in the 1967 Draft and talked Simmons out of attending the University of Michigan in his home state with a $50,000 bonus. On Sept. 21, 1968, the backstop prospect made his Major League debut. What happened in the months in between was a lot of hitting.

Technically playing in the pros at age 17 because his birthday was in August, Simmons opened his career in the Gulf Coast League, going 7-for-20 with four extra-base hits (including two homers) in a six-game span. That was enough for the St. Louis organization to kick its first-rounder to Class A for 47 games the rest of the way. Simmons finished with a .269/.342/.427 line and four homers in his stay with the then-Cedar Rapids Cardinals — strong numbers to be sure, but even more impressive considering he had been playing high-school ball just a few months prior.

Where Simmons truly took off was the following season with the Modesto Reds. Still a teenager for the duration of the summer, Simmons still managed to lead California League qualified hitters with a .331 average, a .415 on-base percentage, a .985 OPS and 117 RBIs through 136 games. He finished third with 28 home runs and ranked second among qualifiers with a .570 slugging percentage.

Simmons was as good a catching prospect as could be found at the time. He knew it then. And he still knows it now.

“At the Minor League level, a guy like George Brett or someone like myself — people that can hit — when they go through the Minor Leagues they’re just tearing it up,” said Simmons, speaking at the Winter Meetings in San Diego on Monday. “Your confidence starts soaring, and you think you’re invincible. By the time I was 19, 20 years old having just crushed everything everywhere I played in the Minor Leagues, I figured there wasn’t a place on Earth I couldn’t play. So I was ready in my mind to play in the Majors. Now, I got a rude awakening in a way, and I took my lumps plenty. But in the Minor Leagues, I just felt like I couldn’t make an out.”

The Cardinals agreed, giving Simmons a two-game cup of coffee in late September 1968. Only Jimmy McMath, born 14 days earlier than Simmons, was younger among Major League debutantes that year. The Cards bumped their catching prospect to Triple-A Tulsa the following season, where his numbers weren’t quite as eye-popping, but still impressive. Simmons finished with a .317/.365/.495 line and 16 homers over 129 games with the Oilers that summer, eventually returning to St. Louis again in late September to appear in six games.

Why it took Simmons so long to come back to the Majors after such an early debut was a problem many Minor Leaguers still bump into. Gavin Lux has Corey Seager. Ted Simmons had Tim McCarver and, later, Joe Torre.

McCarver had been up with the Cardinals since 1959, when he debuted at age 17 himself, and helped the Cardinals win two World Series before Simmons could hope to sniff the Majors. But with Simmons in the pipeline, the Cardinals decided to move on from the veteran after back-to-back sub-.700 OPS seasons in 1968 and 1969, trading him to the Phillies the following offseason. (That is more well known today as the Curt Flood trade.)

“Timmy was a mainstay,” Simmons said. “He was the catcher for the Cardinals in ’67, ’68. He was the guy. Then I came through the Minors in the fashion I came through, and the writing was pretty much on the wall.”

There was another roadblock in the future Hall of Famer’s way, however. Torre had come over via trade in March 1969, assuming first-base duties in his first season. The future Yankees manager was prepared to move behind the plate to take over for McCarver in 1970. He would have jumped over Simmons on the St. Louis depth chart, before the situation changed.

“The reason I came up to the Major Leagues [for good] was another unfortunate circumstance occurring to Mike Shannon,” Simmons recalled Monday. “Mike Shannon developed the early stages of nephritis. It was determined in Spring Training through one of the medical tests he had, and he was going to have to retire. So at that time, Torre — who was scheduled to be the catcher and Shannon was going to be the third baseman — they shifted him to third. They brought me up from the Minors at Triple-A to the Majors, and I stayed for the duration.”

Simmons went back to St. Louis on May 30, 1970 after another 15-game stay with Tulsa and didn’t return to the Minors again before retiring from the game in 1988. He split time behind the plate with Torre, who made 63 starts that year at third base. Torre went on to win National League MVP honors that year, the only such accolade of his career. Simmons batted .243/.333/.317 with three homers in 82 games in his official rookie season, taking the aforementioned lumps he hadn’t yet experienced in the Minors. But by getting his career going on a club with multiple future Hall of Famers, Simmons felt he was on the right track to bringing his hot Minor League bat to the top level.

“Playing behind a guy like Torre, [Bob] Gibson, [Lou] Brock, [Steve] Carlton … these guys were in the clubhouse every day when I was 20, 21 years old,” he said Monday. “Huge impact.”

Simmons earned eight All-Star appearances over his 21-year Major League career and won a Silver Slugger with the Cardinals in 1980. His 2,472 hits, 483 doubles and 1,389 RBIs rank second all-time among Major League catchers who played at least 50 percent of their games at the position. His 50.3 WAR, per Baseball-Reference, sits 10th in that group. Taken altogether, that resume has at long last earned him a spot in Cooperstown.

Quick ascent through the Minors. Long wait to hear the call from the Hall. For Ted Simmons, they’re one and the same.

“Everything that happened in the past is all part of it,” he said. “A good part of it. It was supposed to happen just like this, and it happened just like this. I couldn’t be happier and I wouldn’t change a thing. Not one thing.”