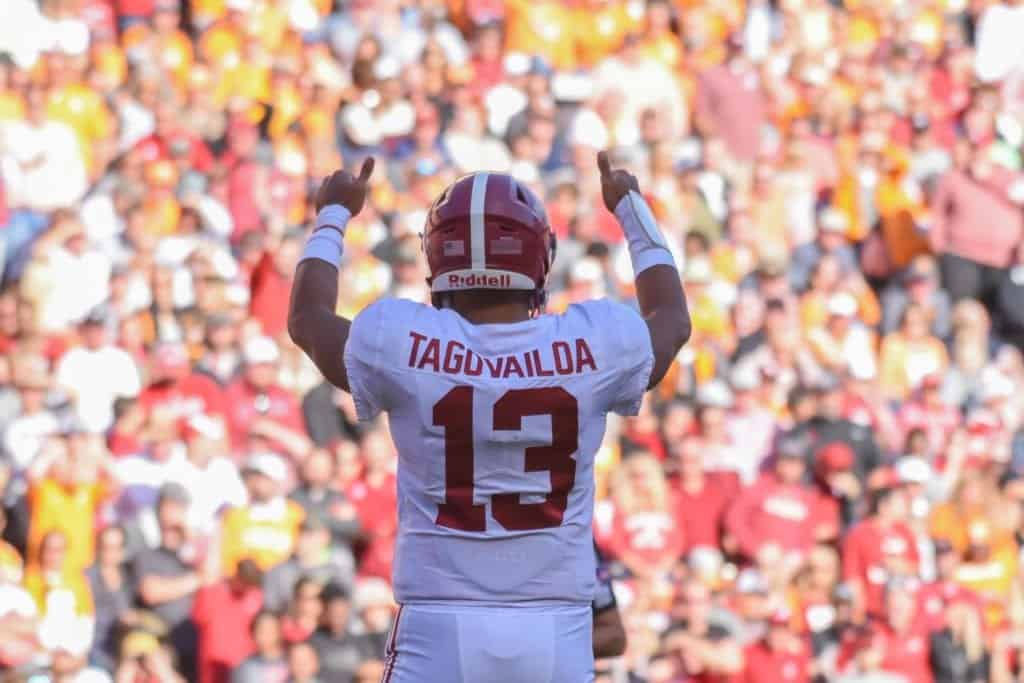 Before going down with a severe hip injury, Tua Tagovailoa entering the 2020 NFL Draft was all but a foregone conclusion. The assumption was that he would finish his year with the Alabama Crimson Tide, likely play in the National Championship, and declare for the draft as the potential number one pick. That all changed on November 16 when Tua suffered a right hip dislocation with a posterior wall fracture against Mississippi State. Fast forward to today, and Alabama is on the outside looking in when discussing the college football playoff, and Tua has expressed doubts when talking about his future and the draft. Following a week of multiple interviews, Tua announced that today he would be doing a press conference to address the media.

During today’s announcement, Tua made some interesting statements. He did not clarify what his decision for the future would be, but he did open up about his current process. He openly admitted that it would be difficult for him to pass up being a top 10-15 draft pick. Pro Football Network’s own Tony Pauline mentioned a few weeks ago that he had heard Tua was leaning towards entering the draft.

“I am told by people who are close to him [Tagovailoa] that Tagovailoa is telling people that he is very likely to enter the 2020 NFL Draft. This shouldn’t be a surprise – maybe it’s just an affirmation to some people. But I think right now, the chances of him returning to Alabama, from what I’m hearing from people close to him, are very, very slim.”

That being said, Pauline says that this is the best decision he could make at this time, no decision.

This is the absolute best “decision” Tua can make at this point- no decision. Wait it out and see what happens the next month and a half. No reason to rush into a choice. https://t.co/thq3M3sMjA

When asked about what kind of impact this injury might have on his ability to play in the future, Tua was quite honest.

“I won’t say I will be the same again because there’s metal in here [in the hip] now. I [will] lose some inward rotation [of the hip]. So I won’t be able to twist it as much inward as much. But I wouldn’t need that as much, you know when you’re running you’re usually opening up your hip. The doctors have said that they expect a full recovery and I will be able to go out there and play at 100%. Just won’t be able to twist it inward as much”

In an interview done this past week, Tua said that he was “not too sure” about whether he would enter the 2020 NFL Draft or return to Alabama to rehabilitate from hip surgery — and possibly play football — next season.

“I’m still talking with my parents about it. I’m still not too sure. A decision could come tomorrow or I could wait and decide on the 20th of January. Whatever God puts in my heart and my parents’ hearts, that will be the right thing.”

It might be hard to understand why a player of his caliber would not simply enter the 2020 NFL Draft and see where he lands. Tua explained that his hesitancy stems from not knowing where he could fall in the draft with this recent injury.

“If I leave, I think the risk is a little higher. That risk would be how far do I drop in the draft. To me, it’s 50-50 between going in the first round and possibly going in the second round. If I go somewhere from first (overall) to around 24th, the money will be set. But let’s say — and I am just picking a number — that I go to the 31st pick. That would be about 9 million dollars. That’s a lot of money, an amount of money I’ve never had before, but it’s not high first-round money and you can never make that money up. They say you can (make it up) on your next contract but money lost is money lost to me.”

The reality of the situation for Tagovailoa is that if he decides to return to school for his senior year, two outcomes can be envisioned. First, he could rehab and return to his impressive sophomore form, climbing up draft boards once again for the 2021 NFL Draft. Or secondly, he could reinjure himself playing for no compensation and jeopardize his NFL career.

Having suffered a number of injuries already in his young career, risking another season playing college football seems quite dangerous. Concerning his current hip injury, the hope is he can avoid a “Bo Jackson” situation where avascular necrosis (AVN), which is a lack of blood supply to the ball of the femur, causes the bone and overlying cartilage to die out. Even if he is able to avoid that, Tagovailoa would still need to worry about the inevitable post-traumatic arthritis. He also has had two ankle surgeries.

There is a strong chance that Tua will not be able to work out in full come the 2020 Scouting Combine. Team medical staffs will only be able to evaluate his physical exam, imaging studies, and medical records to forecast his medical status. As the young QB said, there is potential he could completely fall out of the first round. This being a quarterback-driven league, it is likely that a team will take a chance on him in the first round. The Miami Dolphins currently have three first-round picks and could use one to get a potential franchise QB.

We do not know what the future for Tagovailoa holds, and today’s press conference didn’t shine any more of a light on his path. However, we now know that he is doing everything he can to get back onto the football field and his decision will be a well thought out one. Tua continues to remain positive and grateful to his fans. He even let us know that at the end of the day, he is still happy.

“I’m happy. I’m OK. I’ve been given that strength. People look at that and feed off it. I’ve gotten over 11,000 letters, I think. Letters from Hawaii, Arizona, people all over the continent. They are well-wishers but that lifts their lives, too.”