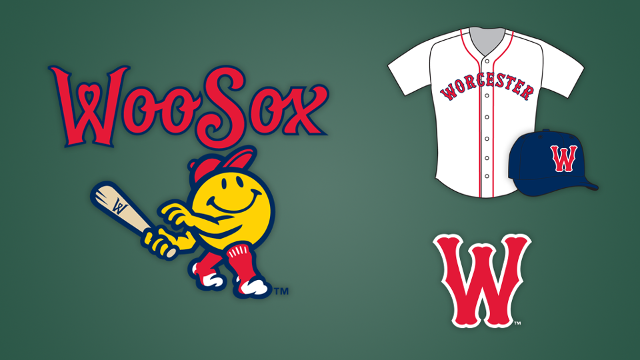 The Woo is coming through.

On Monday evening, Boston’s Triple-A affiliate announced that, beginning in 2021, it will be known as the Worcester Red Sox. But while that’s the International League team’s official moniker, its “WooSox” nickname promises to be more prominent. The first half of this portmanteau references the first syllable of Worcester (pronounced “Wu-ster”), the central Massachusetts city that is currently building a new stadium, Polar Park, to house the team.

Monday’s team name announcement, staged at Worcester’s Mercantile Center and broadcast on regional sports network NESN, included the release of a primary logo featuring a red sock-clad yellow smiley face. The smiley face, an iconic piece of commercial art, was created in Worcester. A heart intertwined within the “W” references Worcester’s central “heart of the commonwealth” location. The team’s logos were created by Brandiose, a San Diego-based design company.

The WooSox are replacing the Pawtucket Red Sox — commonly referred to as the PawSox — who are playing their final season at historic McCoy Stadium in 2020. Pawtucket, Rhode Island’s sole Minor League Baseball locale, has served as Boston’s Triple-A affiliate since 1973. Pawtucket’s imminent move to Worcester marks the culmination of a process that began in 2015, when a group led by then-Boston Red Sox CEO and president Larry Lucchino purchased the club and quickly revealed a plan to relocate to a proposed new ballpark in nearby Providence, Rhode Island. That plan fell through, but efforts to relocate the team continued apace. The move to Worcester was announced in August 2018.

“When we made it official, papers from Boston to Springfield proclaimed the team the WooSox,” said team president Dr. Charles Steinberg, who previously served as executive vice president of the Boston Red Sox. “We didn’t want to be presumptuous and say that was what the name ought to be. First and foremost, we are the Red Sox. It’s the name of the Pawtucket team and therefore will be the name of the Worcester team. So there’s been no name change, really. The nickname is what you’re changing, because if you say in Worcester that you’re going to a Red Sox game tonight, people would ask ‘At Fenway or at Polar Park?’ In Pawtucket they are the PawSox. We’re the WooSox.”

While branding around the WooSox nickname may have seemed like an inevitability, it was far from an automatic decision.

“We knew that we needed to immerse ourselves in Worcester and central Massachusetts, get a feel for the city and the region, listen to the fans and hear what their thoughts were about a nickname,” said Steinberg. “We also engaged Brandiose to see what they could come up with. More than 1,000 fans submitted 218 names, and we have been having conversations with everybody we’ve met, from senior centers to kindergartens and everywhere in between.

“We received lots of clever names referencing the history,” he continued. “In the 1880s there was a team that was known simply as the Worcesters. There was a debate about whether there was a team named the Ruby Legs, a variation on ‘Red’ and ‘Sox.’ [Liquid-fueled rocket inventor] Robert Goddard is from Worcester, so there was the Rocket Sox. Worcester has had a nickname, of sorts, of Worm Town. It’s not because of worms. Apparently it’s because train [schedules] would say ‘Worcester, Massachusetts’ in the abbreviated form of ‘Worm.’ It became Worm Town, so Wicked Worms got play. And there’s vibrant nightlife in Worcester, so Night Owls got play. Paying tribute to the Dustin Pedroia-type of ballplayer, there was the Dirt Dogs. And so then what’s the feline counterpart? We came up with Gritty Kitties. And if you’re unripened fruit, not quite ready for Fenway, then maybe the Green Bananas.”

But in the end, WooSox could not be defeated.

Choosing WooSox as a nickname was one thing, figuring out how to represent it visually was something else entirely.

“Now we’re getting into it, something esoteric and juicy,” said Brandiose co-founder Jason Klein. “Is WooSox, as shorthand for Worcester Red Sox, just about celebrating Worcester and the Red Sox? Or is ‘WooSox’ also a made-up word that requires us to figure out what the ‘Woo’ part of the Sox is? … Is Woo cheering? Is it a sound that an animal makes, like an owl? By the way, we spent literally two weeks debating this. And there’s another one, that ‘Woo’ is romancing someone. That played into the idea of the heart of the commonwealth. So there are four routes: It’s shorthand for Worcester, a cheering sound, an animal sound or wooing someone. Then we asked ourselves if we’re overcomplicating this.”

During this period of endless brainstorming, “Smiley” was brought into the picture.

“[Worcester] is the birthplace of the smiley face,” said Steinberg. “It was first drawn by an advertising executive by the name of Harvey Ball in 1963. That was the original smiley face and that’s also a point of pride in Worcester. So the logo shows the W with the heart in the middle of it and a smiley face wearing the obvious red socks and there’s a heart-shaped W on his bat. It says kids and fun and family.”

WooSox, then, is for the children. But Klein said this family-friendly iconography was part of a larger city-specific recipe.

“Worcester is a gritty town, that’s how it sees itself,” he said. “In focus groups that word kept on coming up: gritty…. Obviously we wanted to have industrial grit, so the font is more of a classic New England industrial font. [Worcester executive vice president of sales and marketing] Rob Crain said, ‘Hey, it’s like a recipe. You need a little industrial grit, a little bit heart of the commonwealth and a little bit of Minor League Baseball fun.’ That’s where Smiley comes in, and then what pose do we put him in? Well, the most iconic Red Sock is Ted Williams. So Smiley is in a Ted Williams pose.”

Steinberg said smile and heart-related imagery will be part of the Polar Park experience.

“You can expect to see a smiley face atop the foul poles and heart-shaped light towers,” he said. “Expect to see a giant heart on Summer Street, which will be used as a pedestrian thoroughfare during our games. It tells you that this is a good time to be in the heart of the commonwealth. And as far as the Woo itself, while contrived, you could certainly make the argument that the city set out to woo the Sox from Pawtucket in order to build in Worcester.”

Monday’s announcement solidified and made official so many aspects of the team’s brand. And yet, so much remains to be determined.

“Fans will give it the life they want it to have,” said Steinberg. “It’s up to us to observe and immerse and reflect how the fans feel. To me, it’s important not to overreach. The fans will play the song. We just want to play along.”