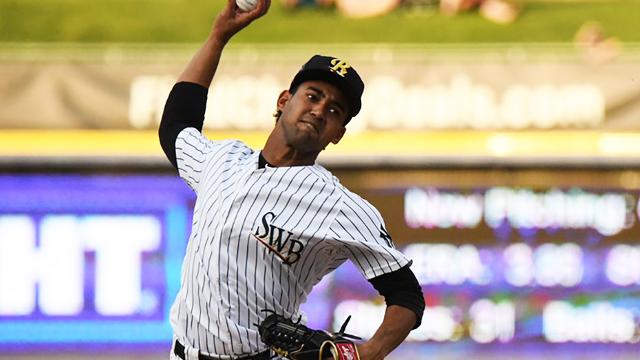 Catcher — Kyle Higashioka, Scranton/Wilkes-Barre (70 games), New York (18 games): The 29-year-old makes his second appearance as an MiLB.com Organization All-Star after a third straight season in which he served as a solid option when injuries took their toll in the Bronx. With the RailRiders, Higashioka posted a .278/.348/.581 slash line with 20 homers, 56 RBIs and 43 runs scored while helping lead the club to a postseason berth. Over 18 games in the bigs, the 2008 seventh-rounder notched eight extra-base hits, drove in 11 runs and did not commit an error.

Honorable mention: Gustavo Campero, GCL (two games), Pulaski (36 games): The Yankees have built a reputation for depth at the catching position, and Campero is just the latest example — even if his performance came as a bit of a surprise to the organization. The 22-year-old broke out in his first taste of the Appalachian League — batting .293 with nine extra-base hits, 12 RBIs and 14 runs scored. He also showed improvement behind the plate, posting a .988 fielding percentage while throwing out 10 of 25 attempted basestealers.

“He’s a switch hitter and he really took advantage with his approach at the plate from both sides,” said Pulaski skipper Luis Dorante. “He’s a little guy who is gap to gap, not a homer guy, but has a little pop still. He can run for a catcher, his arm is promising and he just did a good job for us all around.”

“His production speaks for itself,” said Thunder manager Pat Osborn. “The biggest thing for Gitty is he was able to stay healthy. He’s been battling injuries, missed time. And that prevented him from putting a year together. But this season he was able to stay on the field and get everyday at-bats, and in doing that his production was there and he had a tremendous year.”

Second baseman — Hoy Jun Park, Trenton (113 games): The native of South Korea appears to be coming into his own after signing as an international free agent in July 2014. Park hit a career-best .272 with 41 RBIs, 20 doubles and 113 hits. Park saw the bulk of his time at second but also played 30 games at short and posted a combined .975 fielding percentage. The 23-year-old was the hero for the Thunder in Game 3 of the Eastern League Finals when he stole home and provided the difference in a 2-1 victory en route to a championship for Trenton.

“He joined us a few weeks late, but he hit the ground running as soon as he joined us and was a huge part of the team defensively as well as offensively at the top,” Osborn said. “He could play both positions in the middle and play them well. He gets on base and steals some bags. He’s coming into his own as far as the type of player he’s gonna be. I think he’s close to Major League ready.”

Third baseman — Mandy Alvarez, Trenton (58 games), Scranton/Wilkes-Barre (66 games): Alvarez was on a shuttle between Scranton/Wilkes-Barre and Trenton this season, but wherever he suited up the 25-year-old made it count to earn his second straight Organization All-Star nod. Alvarez posted a combined .270/.324/.417 slash line with 31 doubles, 11 taters, 76 RBIs and 52 runs scored. He saw time at second and short, but over 105 combined games at the hot corner, Alvarez posted a .947 fielding percentage in 281 total chances.

“Mandy really worked his tail off to improve his overall game, especially on the defensive side of the ball,” Osborn said. “He came into Spring Training in tremendous shape, changed his body, leaned out, was quicker and more agile. His range improved. He’s another guy who came into his own this year in terms of turning himself into a very good upper-level player. Whenever he was with us he made our ballclub better.”

Shortstop — Kyle Holder, Trenton (112 games): Holder opened some eyes at big league camp this year when Yankees manager Aaron Boone singled out his performance during a press conference. The 25-year-old held his own at the plate but impressed with his glove — not committing an error while playing 85 innings at second, third and short combined. The defensive wizardry continued in the Eastern League during the season while his bat began to come around as well. Holder put together a .265/.336/.405 slash line with 25 doubles, three triples and nine homers. He showed improved discipline with 41 walks and drove in 40 runs while scoring 48 times.

“His best overall year of his career,” Osborn said. “Along the lines of Gittens, Kyle was able to stay on the field. He played the whole year and offensively he figured out what kind of hitter he is. He’s a line drive hitter and a good bunter, doesn’t try to do too much, the ball can fly off his bat, and he can spray the ball around the field and run into an occasional homer. Defensively, always premium at shortstop. The best defensive infielder in the organization. It was nice to see him put together the year he did — he’s knocking on the door.”

“He’s got some special talent,” RiverDogs skipper Julio Mosquera said. “In the hitting department, he’s one of those guys who can make adjustments on the fly, and he’s got an incredible ability to recognize pitches. He’s not afraid to work the counts. He’s gonna swing at what he can drive and he can drive it to all fields. He showed more power than normal this year, put the ball in play better. He’s got good hands — better than guys his age. He’s not afraid to go deep in counts, he has very good strike zone discipline and it’s going to help him moving forward.”

Trey Amburgey, Scranton/Wilkes-Barre (124 games): Amburgey makes his third appearance as an Organization All-Star and second in a row. The 25-year-old batted .274 while slugging .494 for an .822 OPS. The 2015 13th-rounder smacked a career-best 22 homers while also setting career highs with 31 doubles, 129 hits and 73 runs scored. Amburgey also drove in 62 runs and fell one shy of his career-high mark with 32 walks.

Josh Stowers, Charleston (105 games): Acquired from the Mariners in exchange for Shed Long, who was acquired from the Reds for starter Sonny Gray, Stowers made a strong first impression in his first season with the organization. The 22-year-old batted .273/.386/.400 with 33 extra-base hits, 61 runs scored and 40 RBIs. His plus-speed was on display all year as he swiped 35 bags and showed the ability to handle all three outfield positions — committing just two errors in 196 total chances.

“He’s a talented guy who is really fast. Josh can run,” Mosquera said. “He battles with his at-bats, he’s shown some power and he just put together a really nice year for his first time in the organization. He’s very strong, he’s making more contact consistently, and I think his numbers will be really good because he’s understanding how his swing works. And he can play all three spots in the outfield with his speed, and that’s very valuable for any team.”

Utility — Ryan McBroom, Scranton/Wilkes-Barre (117 games), Kansas City (23 games): McBroom was a production machine for the RailRiders on both sides of the ball. The 27-year-old posted a .315/.402/.574 slash line with a career-best 26 homers, 29 doubles, 87 runs and 66 RBIs. McBroom also set a career mark with 58 walks. In the field, the 2014 15th-rounder of the Blue Jays split time between left, right and first base. He made a combined three errors over 549 total chances. The West Virginia product was traded to Kansas City on Aug. 31 and made his Major League debut with the Royals on Sept. 3.

Right-handed starting pitcher — Deivi Garcia, Tampa (four starts), Trenton (11 starts), Scranton/Wilkes-Barre (11 games, six starts): New York’s top prospect played at three different levels for the second straight year and made it to the International League. Garcia earned his first Futures Game selection and was named a midseason All Star in the EL after putting together a record-tying performance with 15 punchouts over six scoreless frames with Trenton. MLB.com’s No. 62 overall prospect had a penchant for whiffs at every level he took the mound — notching 165 strikeouts over 111 1/3 total frames.

“I love everything about him,” Tampa pitching coach Jose Rosado said. “He’s a young kid, he likes to compete and he has one of the best confidence levels that I’ve ever seen from a 19-year-old, which is what’s making him what he is right now. He gets the most out of everything he has. He’s got four very good pitches that he can throw in any count and can land for a strike at any time. I think this kid, with health, will be able to accomplish great things for the organization.”

Honorable mention, Miguel Yajure, Tampa (22 games, 18 starts), Trenton (two starts): The 26th-ranked Yankees prospect made such an impact with the organization in 2019 that New York recently added him to their 40-man roster to protect him from the upcoming Rule 5 Draft. Yajure opened the year in the Florida State League, where he posted a 2.26 ERA and 1.08 WHIP over 127 2/3 frames while fanning 122 and walking 28. He was promoted to the Eastern League on Aug. 25 and finished his season with a pair of dominating starts. The 21-year-old allowed one run and a pair of walks while whiffing 11 in 11 innings.

“This is a guy who is always trying to get better every single day,” Rosado said. “He likes to ask questions. He works hard. He’s a very detail-oriented guy. He looks to improve little things to make a big impact. He’s a very smart kid and I’m happy he was able to accomplish what he did this year. Since the first day he was out there looking for something to improve in his game, and more than anything he started to understand his body and know himself and it helped him stay healthy and consistent.”

Left-handed starting pitcher — Josh Maciejewski, Staten Island (six games), Charleston (three games), Tampa (two games), Scranton/Wilkes-Barre (three games): The 24-year-old spent the bulk of his year in the New York-Penn League; however, if there was a club in the system in need of a spot starter, Maciejewski was the guy. The 2018 10th-rounder made starts at four different levels this season and pieced together an admirable year, posting a 2.33 ERA and 0.97 WHIP while limiting opponents to a .187 average over 73 1/3 total frames.

Relief pitcher — James Reeves, Tampa (six games), Trenton (27 games): Since being taken in the 10th round of the 2015 Draft, it’s been a seesaw career for Reeves. However, the southpaw may have found something this season. Reeves saw time with the Thunder and Tarpons, posting a 1.87 ERA and 1.00 WHIP over 67 1/3 combined innings. The 26-year-old notched 83 punchouts to 26 walks and held opponents to a .177 average in 33 total appearances.

“He’s a crafty lefty who can throw strikes,” Rosado said. “We made some adjustments with him using analytics and we got to spend some time on that information and he started to learn from it himself. He figured out a way to pitch — and not just rely on one pitch — and that led to this success.”

Rob Terranova is a contributor to MiLB.com. Follow him on Twitter, @RobTnova24. This story was not subject to the approval of the National Association of Professional Baseball Leagues or its clubs.