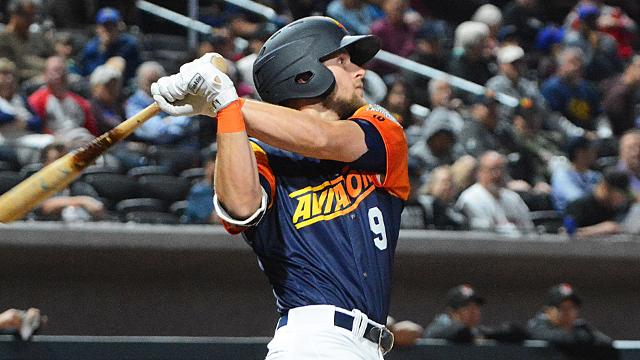 Leading that charge is a seasoned bunch pounding on the proverbial door to the big leagues. Triple-A Las Vegas finished first or second in virtually every offensive category in the hitter-friendly Pacific Coast League last season, and Double-A Midland came in third in team ERA in the Texas League (3.92). The driving forces behind the movement figure to factor into the Oakland equation sooner rather than later, and if things keep going their way, they have the potential to be the variables that lead to a long-awaited winning solution.

“Jonah had a breakout year for us. … About a month into the season, he kind of really took off,” said A’s coordinator of instruction Ed Sprague. “He got a chance to go to big league camp — I think getting some inspiration from Bob Melvin was helpful. And then he started off well, got the chance to go to Triple-A. I think another gear kicked in for him, just energy level-wise, leadership-wise. [He knew] that he was getting a chance to be really close to the big leagues, so I think that fueled his fire a little bit.”

First baseman — Seth Brown, Las Vegas (112 games), Oakland (26 games): Brown has spent just two seasons primarily as a first baseman and garnered Organization All-Star honors both times. The five-year veteran crushed 37 homers as the anchor of the Aviators’ lineup, landing him second in the Pacific Coast League and fifth in all of the Minors. He scored 101 runs and drove in another 104, third and fourth most of anyone in the league respectively. He was anything but one-dimensional as well, finishing with a line of .297/.352/.634. He ended the year with Oakland, where he batted .293/.361/.453 but didn’t go yard over 26 games in his first taste of big league ball.

“It was a great story,” Sprague said. “He really put himself on the map. Probably went from, at the start of Spring Training, being maybe a fourth outfielder in Double-A. Obviously he had a couple good years in Stockton and Midland last year, had a chance to play a little first base, learn a new position. … Brown became that guy in Triple-A and just took off and put himself on the map.”

Video: Brown slugs his third home run of the game

Second baseman — Corban Joseph, Las Vegas (97 games), Oakland (11 games), Pittsburgh (nine games), San Francisco (eight games): Joseph may not be with the Athletics anymore, but the veteran infielder made one heck of an impression in his one and only year with the organization. The 31-year-old hit .371 over 97 games with Las Vegas, the 10th-best average in the Minors. He also homered 13 times and socked 35 doubles, yielding a 1.006 OPS and making him one of the most complete hitters in the PCL. He batted just .189 over 11 games with Oakland in August before moving on to big league stints with the Giants and Pirates to end the year.

Third baseman — Sheldon Neuse, Las Vegas (126 games), Oakland (25 games): After an underwhelming Triple-A debut last season, Neuse bounced back to take possibly the most significant jump of any A’s prospect in 2019. His home run totals soared from five to a career-high 27, raising his average over 50 points from .263 to .317 in the process. The 2016 second-round pick knocked in 102 runs and scored 99 times, slotting him fifth in the PCL in both categories. Sprague wasn’t surprised to see a surge like this from the team’s eighth-ranked prospect — one he says resulted from a focused mental effort at the plate.

“He really had to kind of get back to his approach,” Sprague said. “He had to shrink his strike zone, simplify his approach, not worry about hitting the ball out of the ballpark. … You take the second half of 2018, combine it with 2019, and he really worked hard on his discipline at the plate and attacking the ball.”

Shortstop — Jorge Mateo, Las Vegas (119 games): If Neuse didn’t take the biggest leap in the organization, the man to his left in the infield did. Mateo boosted his line from .230/.280/.353 to .289/.330/.504 with the Aviators, setting personal bests in average and slugging percentage. The Athletics’ No. 4 prospect belted a career-best 19 long balls after dipping to just three in 2018, and he stole 24 bases while being caught 11 times. Sprague attributes Mateo’s growth to an adjustment similar to that taken by Neuse, noting its effects particularly on his power production.

“Jorge had to shrink the strike zone, calm his swing down a little bit, kind of a simpler approach,” Sprague said. “And when he was able to do that, he’s got the bat speed and the strength to hit the ball out of the ballpark. And that’s really what’s happening — [he] basically swung at better pitches and had better quality at-bats.”

Mark Payton, Las Vegas (118 games): Payton had a resounding breakout campaign in 2019, but his emergence was a bit more unexpected. The A’s acquired the 27-year-old from the Yankees off waivers last December, an investment that quickly proved worthwhile. Payton set career highs almost across the board with the Aviators, finishing the year with a line of .334/.400/.653 and belting 30 home runs after doing so just 32 times in total over his first five seasons. He tied for eighth in RBIs in the PCL with 97 while scoring 80 times.

Sprague admits he didn’t think much of the plucky veteran when he first joined the organization, but recalls someone who did predict his rise to prominence: Midland manager Scott Steinmann, who got a first-hand look at Payton in Spring Training.

“We always do a ‘pick to click’ for the year, and he chose Mark Payton out of nowhere, a guy we never had,” Sprague said. “Here was this little guy who was going to be a fourth outfielder in Vegas, and he goes out and hits 30 homers. Another guy who uses all parts of the ballpark, so he’s a very tough out.”

Dairon Blanco, Midland (78 games), Northwest Arkansas (32 games): Blanco also is no longer with Oakland — he was traded to Kansas City in the deadline deal for lefty Jake Diekman after an impressive four months with Midland. The 26-year-old posted a solid .276/.342/.468 while homering seven times, scoring 57 runs and driving in 44 over 78 games. His real damage was dealt on the basepaths, however; Blanco swiped 27 bags with the RockHounds before adding six more with Northwest Arkansas to place fourth in the Texas League.

Dustin Fowler, Las Vegas (130 games): After a crushing injury sustained in his big league debut cut his season short in 2017, Fowler battled back and put together a notable 2018 campaign between Oakland and Nashville. And while the 24-year-old may not have made it back to The Show this year, he impressed with his performance. Fowler batted .277/.333/.477 and clubbed a career-high 25 homers in 130 Triple-A games. He also scored 98 times (sixth-most in the PCL) while driving in 89 runs.

“Just happy to see him play healthy and get a chance to get a lot of at-bats under his belt,” Sprague said. “Obviously the injury a couple years ago set his speed back a little bit. He wasn’t quite using his lower half in his swing that maybe he could have and got away from it. So he was kind of able to get back to that a little bit. I think he’s still not back 100 percent with that knee, but he put together a good year and very happy for him to come back from such a devastating injury.”

Utility player — Franklin Barreto, Las Vegas (98 games), Oakland (23 games): Barreto has played nearly half a season over three years in the Majors, including 23 appearances with the A’s this year. But when the 23-year-old wasn’t up in Oakland, he was shifting all around the diamond down in Las Vegas. He appeared at five different positions for the Aviators, primarily in the middle of the infield, but also in left field, center and third base. He was no slouch offensively either, compiling a line of .295/.374/.552 and bashing 19 homers over 98 games.

“We’ve had Franky for so long,” Sprague said. “He’s had big league time almost every year for the last three years, hasn’t been able to stick consistently up there. But we still forget that he’s [23 years old] — he’s still young. So he still hasn’t found the next level with that bat. I think it’s going to come. He’s an extremely strong kid, obviously athletic, can play anywhere … we love the versatility of those types of guys.”

Right-handed starter — Kyle Friedrichs, Midland (20 games), Stockton (three games): Friedrichs got off to a somewhat slow start as the A’s kept the 27-year-old hurler in extended spring training until the end of April. Once he was back, though, it didn’t take long for him to launch possibly the best season of his career. He stitched together a 3.43 ERA over 23 outings between Stockton and Midland, striking out 89 batters over 123 1/3 innings. He allowed just six homers, demonstrating his signature ability to get outs on the ground.

“He just pitches,” Sprague said. “He gives the team a chance to win. He’s not a stuff guy, but he’s learned with his experience how to get guys out. … He’s going to throw strikes, he’s going to compete and you know he’s going to give his best effort.”

Honorable Mention: Grant Holmes posted a 3.23 ERA over 86 1/3 innings between Midland and Las Vegas after missing almost all of 2018 due to injury.

Left-handed starter — Hogan Harris, Vermont (eight games), Stockton (seven games): In a system that includes top lefty prospects Puk and Luzardo, Harris turned in a rookie season deserving of praise. The 2018 third-round pick was a steady force in the Vermont and Stockton rotations after missing all of last year, logging a 3.12 ERA over eight games as a Lake Monster and a 2.51 ERA over seven appearances with the Ports. He struck out 65 batters over 54 2/3 frames, rounding out a debut campaign that has A’s brass excited.

“Another guy who had battled an injury, came back, worked his butt off to get back … a polished college pitcher we took fairly early in the Draft, got hurt right out of the gate,” Sprague said. “Rehabbed, and I believe this was really his first year of doing anything, and was able to work himself up.”

Honorable Mention: Jesus Luzardo posted a 2.51 ERA over 11 games across three levels before joining the big league roster in September.

Relief pitcher — Kyle Finnegan, Midland (21 games), Las Vegas (21 games): Finnegan was absolutely dominant out of the bullpen for Midland and Las Vegas. He posted a 1.59 ERA and nine saves for the RockHounds before rolling that success over to the Aviators, where he logged a 2.89 ERA and went a perfect five-for-five in save opportunities. He struck out a total of 72 batters and surrendered just 19 walks over 50 2/3 innings.

“Another great story,” Sprague said. “On the verge of probably not making the club out of Spring Training … we asked him if he would consider lowering his arm slot just a little bit so he could get a little bit of sink on the ball. He said sure, went right out there, was able to do it immediately. Didn’t really lose any velocity. Now all of the sudden they got the ball down, going east-to-west vs. north-to-south, allowed him to get to his secondary stuff and that was the key to him.”

Jordan Wolf is a contributor to MiLB.com. Follow him on Twitter: @byjordanwolf. This story was not subject to the approval of the National Association of Professional Baseball Leagues or its clubs.